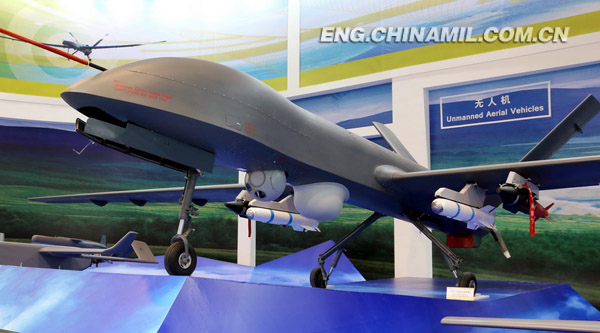 The New York Times reports that China almost used a drone to catch a murderous drug lord in Burma.

China considered using a drone strike in a mountainous region of Southeast Asia to kill a Myanmar drug lord wanted in the murders of 13 Chinese sailors, but decided instead to capture him alive, according to an influential state-run newspaper.

The plan to use a drone, described to the Global Times newspaper by a senior public security official, highlights China’s increasing capacity in unmanned aerial warfare, a technology dominated by the United States and used widely by the Obama administration for the targeted killing of terrorists.

Except they didn’t, so it doesn’t. There are a few things to unpack here.

For starters, the common fear that America’s use of drones will prompt other countries to recklessly use drones for death would suggest that China wouldn’t really care how it got this guy, since they could just appeal to America for their justification. But instead they made a considered, rational, cost-based decision about the best method of grabbing this guy.

Secondly, China’s rise means they will increasingly use advanced technology. This is not a bad thing, per se, though it also means they won’t always do America’s bidding. There is a self-fulfilling aspect to the US-China relationship, and using China’s technological advancements to hype a military confrontation (as some will inevitably do) is a mistake. Instead, this is a key opportunity for the US to include China in a collaborative international framework for how to use these weapons humanely and effectively.

Thirdly, the drug lord China targeted was a monster. He murdered 13 Chinese sailors on cargo ships filled with narcotics in the Mekong River then posted the pictures of the dead people on the Internet. The Chinese government marked him for death, and an armed drone was one option on a menu of choices for how they could locate and kill him.

Fourthly, the role of the public is a key consideration in how countries use drones. While the American public might be getting uncomfortable with using a drone to kill other Americans, they rabidly support using drones everywhere else. Policymakers also love the drones, and insist constantly that they’re the only effective weapon to go after some foes. It is only in the flappy talking head arena that drones are really controversial.

In the Times’ story, the Chinese public was more or less demanding blood over those dead sailors, and the government would have probably been praised for droning that drug lord. America’s approval or precedent is immaterial in that sense: the Chinese could, the Chinese public wanted it, so case closed. The drug lord is still going to die, he’s already been marked for execution.

As for Naw Kham, the fugitive, he was captured at the Mekong River port of Mong Mo after a six-month hunt in the jungles of the Golden Triangle by the combined police forces of China, Myanmar, Thailand and Laos. Naw Kham has received the death sentence from a Chinese court in Yunnan province, and awaits execution, according to Chinese press reports.

Well then. So while this is going to continue to spark fear, uncertainty, and doubt, but this is actually kind of a non-story. Drones remain expensive and difficult to operate the way the US does, and China isn’t quite ready to even try doing that in a friendly environment with cooperative governments to assist.

It remains a big worry what they’ll do in the future as they develop their capabilities more fully. But that day is a long ways off, and considering how they still preferred to capture people rather than kill them (imagine!) it might not even be a real issue in the long run.