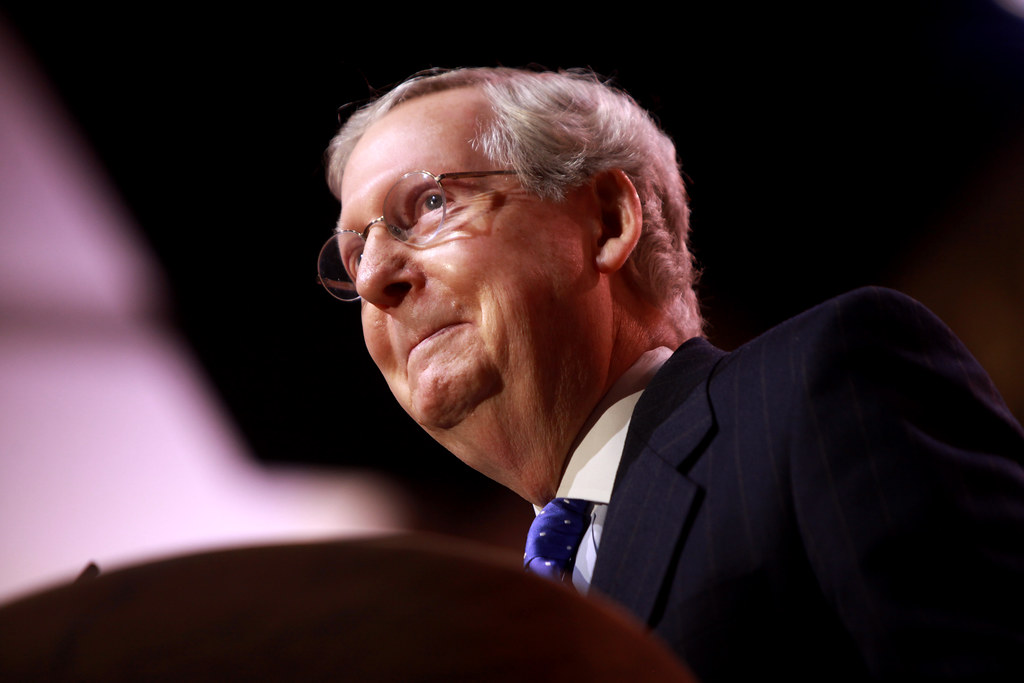 Today, CNN reported that Republican Senate Majority Leader Mitch McConnell thinks it “defies belief” that there are Republicans who don’t want to investigate the role of Russian hackers in attacking the integrity of the presidential election. Many people have cheered his statement as part of a bipartisan effort to uncover just how badly Russia influenced the election, but they’re misguided. McConnell is running a con. Let me explain why.

For starters, the evidence that Russia was behind the hack of the DNC and other associated politicians was clear six months ago. In its initial forensic report on the hack,  in June of 2016, cybersecurity firm Crowdstrike said they recognized the tradecraft in the breach and traced it back to two known Russian intelligence entities:

[W]e observed the two Russian espionage groups compromise the same systems and engage separately in the theft of identical credentials. While you would virtually never see Western intelligence agencies going after the same target without de-confliction for fear of compromising each other’s operations, in Russia this is not an uncommon scenario… Thus, it is not surprising to see them engage in intrusions against the same victim, even when it may be a waste of resources and lead to the discovery and potential compromise of mutual operations.

This much was in the open; we know, both from leaks and other studies of the information security capabilities of agencies like the NSA, that the U.S. government possesses even more sophisticated forensic investigation tools for analyzing foreign intrusions into computer systems. According to the Washington Post, the Obama administration sat down with the majority and minority leadership of Congress to present its initial findings. The loudest naysaying came from Mitch McConnell:

According to several officials, McConnell raised doubts about the underlying intelligence and made clear to the administration that he would consider any effort by the White House to challenge the Russians publicly an act of partisan politics.

Some of the Republicans in the briefing also seemed opposed to the idea of going public with such explosive allegations in the final stages of an election, a move that they argued would only rattle public confidence and play into Moscow’s hands.

So in September, McConnell was literally black mailing the President with the political equivalent of a nuclear first strike if he went public with the intelligence community’s research into Russian hacking. It was part of a broader effort by the GOP to stymie all attempts by Democrats in Congress to investigate Russia’s role influencing the electorate, apparently convinced that revealing Russia’s attack on the election was more damaging than the attack itself. NBC also reported that Russia had similarly broken into the Republican email servers, but declined to release any of their information — a clear sign that they were working to help the Republicans and hurt the Democrats. The self-interest was glaring, even then.

By this point, the Trump campaign had spent enough time poisoning the well by claiming it was a conspiracy with no proof (even though that was not the case and had not been for months), that few really took the issue seriously: in the press it was portrayed as a partisan issue, rather than as a hostile foreign government interfering in our democracy. Thus, when the Obama administration formally and publicly accused the Russian government of having hacked into the Democrats’ email in an effort to swing the election in October, the charge fell flat. The GOP yawned, as did many journalists and the electorate (the public editor at the New York Times later lamented her newspaper’s coverage, saying it never took the story as seriously as it should have because it was too obsessed Hillary Clinton’s emails).

When Republicans even addressed the hacking issue, it was to throw cold water on the idea, begging for a simply unreasonable standard of evidence in order to accept the claim (which many still have not). To get an idea of how insane this stance is, contrast it to 2012, when a hot mic caught President Obama whispering to then-Russian president Dmitri Medvedev that he’d have more time to discuss missile defense after the election. The Mitt Romney campaign, and the entire GOP, went ballistic. Four years later, a preponderance of evidence emerges that Russia was directly intervening on behalf of a presidential candidate — to the point of their diplomats saying so, plainly, to the media — and the GOP reacts with obfuscation and hand waving.

Things are shifting a bit, now. The media and general public may not have cared about Russia’s hacking the election when it would have counted before voting, but now they do care as one of many outrages the Trump transition has foisted upon the country. That the CIA has forcefully come out and accused Russia of acting to secure Donald Trump’s election — a much more assertive charge than the descriptive language used by NSA Director Mike Rogers last month — there is no more wiggle room for Senator  McConnell to stonewall the investigation. He might be pretending there is new information that forced him to change his mind, but there really is not — he had this information months ago and he chose to squash it. He is triangulating, not repositioning.

There is, of course, a catch. The Republicans who are leading the charge to formally investigate Russia’s role in the election in Congress are Senators John McCain and Lindsey Graham, who work on the Armed Services Committee. They have high-level clearances and could mobilize a rigorous and probing bi-partisan, bi-cameral investigation. But Mitch McConnell doesn’t want any quasi-independent panel to lead the investigation, he wants the Senate Select Committee on Intelligence to be in charge. They are more secretive than SASC, and their findings are much more likely to be heavily classified and unavailable to the public (think of the torture report).

SSCI is, of course, chaired by a vocal Trump ally, Senator Richard Burr of North Carolina. Senator Burr has joked about murdering Hillary Clinton (LOL, right?) and spent the last month of his campaign for reelection ignoring Trump’s braggadocio about sexually assaulting women to say they’re best buddies and totally in sync.

That is who McConnell wants to be in charge of investigating how Russia was able to influence the election to favor Donald Trump.

Oh, and the other catch? Mitch McConnell’s wife, Elaine Chao, has been tapped by Trump to be in his cabinet as Transportation Secretary. And McConnell is not recusing himself from her confirmation hearings.

Senator McConnell is playing along with the Congressional investigation of Russia but running it into a dead end run by partisans with a vested interest in preventing any new information from seeing the light of day. Clever, right? Don’t fall for it: demand he appoint an independent body to investigate, like the 9/11 Commission. The life of our country is at stake right now, and if you don’t speak up about it, the Republicans in Congress will sell us out to Russia.