I wish I had a better explanation than just forgetting, but I neglected to gather certain things here that have happened over the last several months and it feels meaningful in some way to do so. 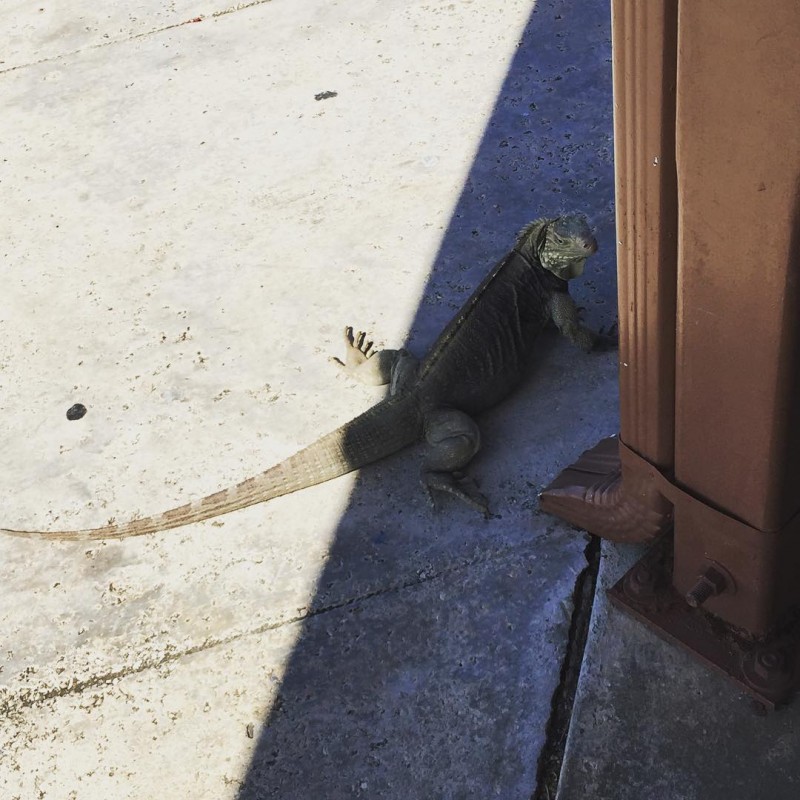 So, there’s that. But I also realized recently that I have been here, in Guantanamo Bay, Cuba, for six months, and that that’s a very weird thing to acknowledge. It no longer seems odd, for example, to randomly stumble over large wild iguanas, like this fellow to the right, nor is it strange to see little anoles and geckos scampering out of the way when walking down a sunlit concrete path. The banana rats are annoying as hell, the wild galliformes pecking along the side of the road aren’t weird anymore, and I’ve sort of resigned myself to finding the occasional scorpion in and around the house.

This is a very strange time to be living at Gitmo; not just because of all the political maneuvering over the normalization of relations with Havana and the eternal angst about the detention center, but also because of what is happening in the mainland.

On any given day, the public televisions in the gym and galleys here are tuned usually to Fox News (far less often CNN), and it’s been upsetting to watch a sort of collective mania take over our culture. I didn’t watch Fox News when I lived in DC (or any TV news, really) because it never felt necessary: I read so many news stories in a day I never felt like I gained anything from tuning in. While the brief news segments on Fox (and Fox News Radio, which is pumped through the Armed Forces Network channels) are perfectly fine and professional, the talk shows on Fox News are nothing short of vile: it is the epitome of everything I was raised to think were pathologies of the Left: victimhood, resentment, divisiveness, speaking half-truths to defame people, and so on. The sheer ugliness of it, coupled to the self-aware smarmy grins by its hosts, is something that is genuinely shocking if you haven’t been numbed to it through constant exposure.

And that the thing: most people here, who are steeped in military and contractor culture (those are parallel, but distinct things, by the way), are so exposed to it they don’t even realize. A man randomly went on a rant about Obama as a mass murdering race baiting white genocidal traitor the other day, and he not only did not pick up on the unambiguous non-verbal queues by several people that his opinion was unwelcome, he didn’t even seem aware that others might think differently. He wasn’t deliberately trolling people, in other words, he didn’t even realize he was trolling, because in a universe like the one created by the Fox News anchors, that sort of talk is considered mainstream.

From afar, isolated here in the middle of the Caribbean Sea, it is surreal to watch the debate in the U.S. devolve into a shrill contest of insults. It doesn’t feel connected to the daily routine here, where the constant sunshine and warmth makes snorkeling and grill-outs one of the most common recreations. Despite the occasional spot of ugliness of opinion, the smallness and insularity of the community here means that the standards for good conduct in public is rather high (in private, the gossip flows freely, however). It is like a completely different culture than what appears on TV, as masses of people riled up by their demagogues block the streets and accuse each other of treason and murder.

That’s one reason I’m keeping myself busy with Viewscreen, which should be posting its next month of stories soon. I’ve let some projects slide; my initial ambition of writing a cookbook here has been undermined by unmet expectations for a number of reasons I can’t go into right now. But I’ve also been keeping myself busy with other writing projects as well, including some (yes, more than one) that are book-length.

It seems like the only thing TO do, apart from the occasional emoting on Twitter or something. But I’m not exactly eager to see what happens over the next six months, far away in my old hometown. It’s difficult to shake the feeling that I am watching, from afar, as our society psyches itself up to collectively jump off a cliff.