So the Guantanamo Bay Naval Base is an interesting beast. It is incredibly beautiful, at least right now where a wetter-than-usual couple of weeks has made everything green. But it is also incredibly isolated. Every day things aren’t quite as convenient as they are on the mainland; most food, for example, comes in on a monthly (or bi-monthly) barge and if they don’t ship it, it’s really hard (or really expensive) to get.

Much of the fresh food that comes here is in high demand; the people I’ve met so far have counseled me to over-buy ingredients that I know I use regularly, just in case they run out and I’m stuck before more arrives (I heard stories of people going weeks without eggs, for example).

These barges are key to life on the island. My usual kitchen things (dishes, pots and pans, et cetera) won’t arrive here until the next barge. Luckily, the base is prepared for this and gives new arrivals loaners to hold you over. It’s not the full panoply of kitchen stuff that I’m used to, so I’m treating it as an adventure, figuring out what my limitations are and trying to make them work for me.

At the same time, I have no sense yet for what I need to stock up on, though I’ll learn that as time goes on. In the meantime, I’ve been trying to work with food that is either shelf-stable, or frozen, or that keeps for a long time in the fridge. One of those items is silken tofu: 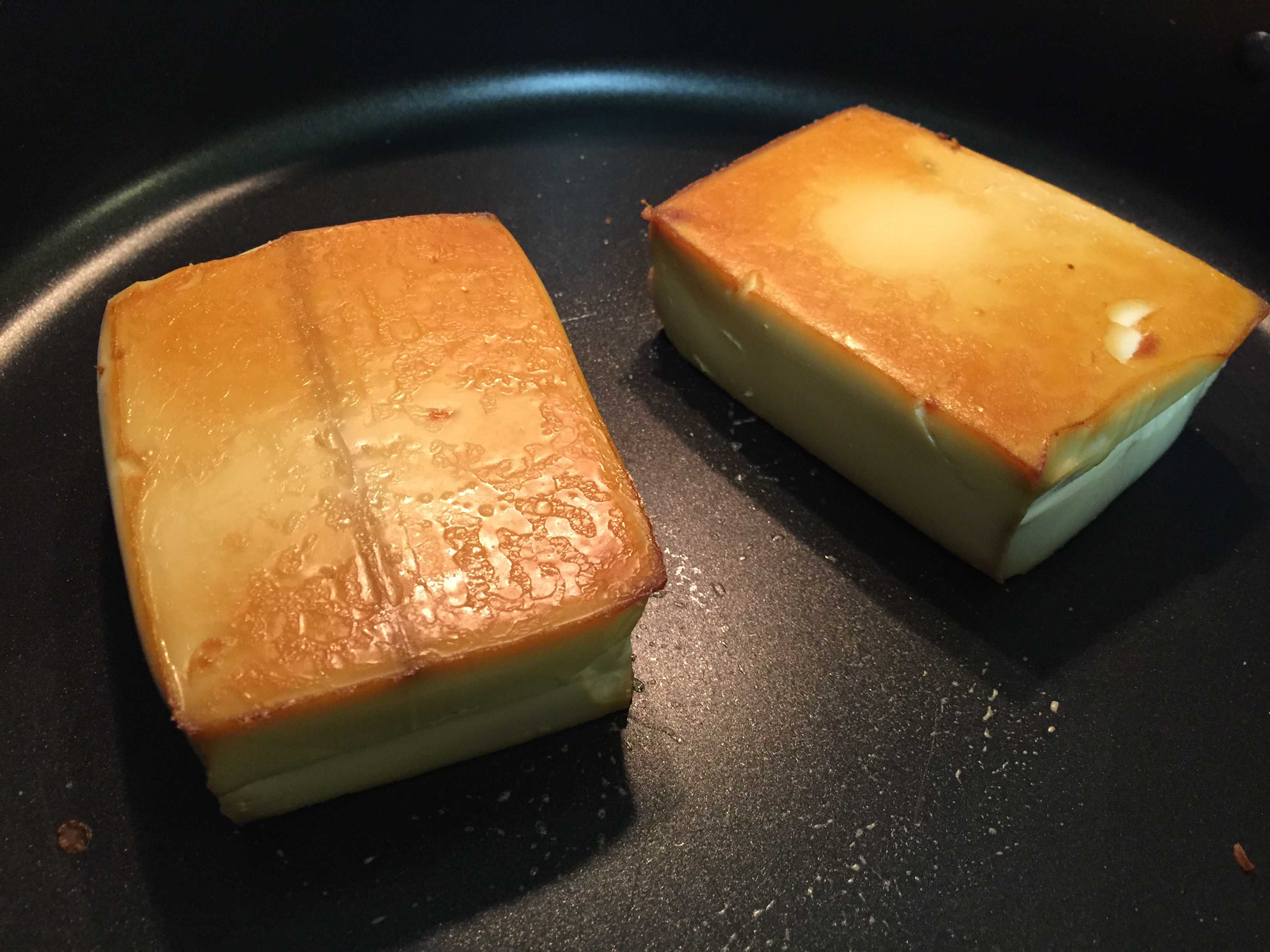 It’s hard to handle, since the silken nature of it also means it is very soft and very delicate (which comes in handy when you’re making lower-fat mousse, for example, or a smoothie or breaking it into a salad). But I wanted something more substantial so, taking a cue from Mark Bittman, I removed them as carefully as I could from their cartons, blotted them dry with a paper towel, and sprinkled them with salt. Placed dry in a nonstick skillet in a 350 oven, they dry out in a little over an hour and the bottom side turns that rich caramel color you see above. The rest of the tofu turns a beautiful custardy texture, almost like soft boiled egg, and developed a delicious nutty flavor. Once they’re browned pull them out onto a paper towel to drain and cool a bit.

Seriously, if you turn your nose up at tofu you’re doing it wrong. I mean that literally: you are either eating it or making it all wrong, because done right it is immensely versatile and interesting. Anyway, after they cooled I wrapped one of those blocks up and fridged it to use later; the other one I cut into 1-inch cubes and the browned slightly in the same skillet until the cut sides were slightly caramelized (it took about 8 minutes total). But what to serve with baked, caramelized tofu?!

Anyway! With iffy loaner kitchen things and a somewhat limited ingredient availability, I figured the easiest thing in the universe is to stir fry everything and serve it over rice. It takes a bit of chopping, but with almost any vegetable you have on hand it can be made delicious. I happened to have some purple cabbage, carrots, and scallions. A shred on the cabbage, a julienne on the carrots, and short segments for the scallions seemed to get them all to about the same size for even cooking. 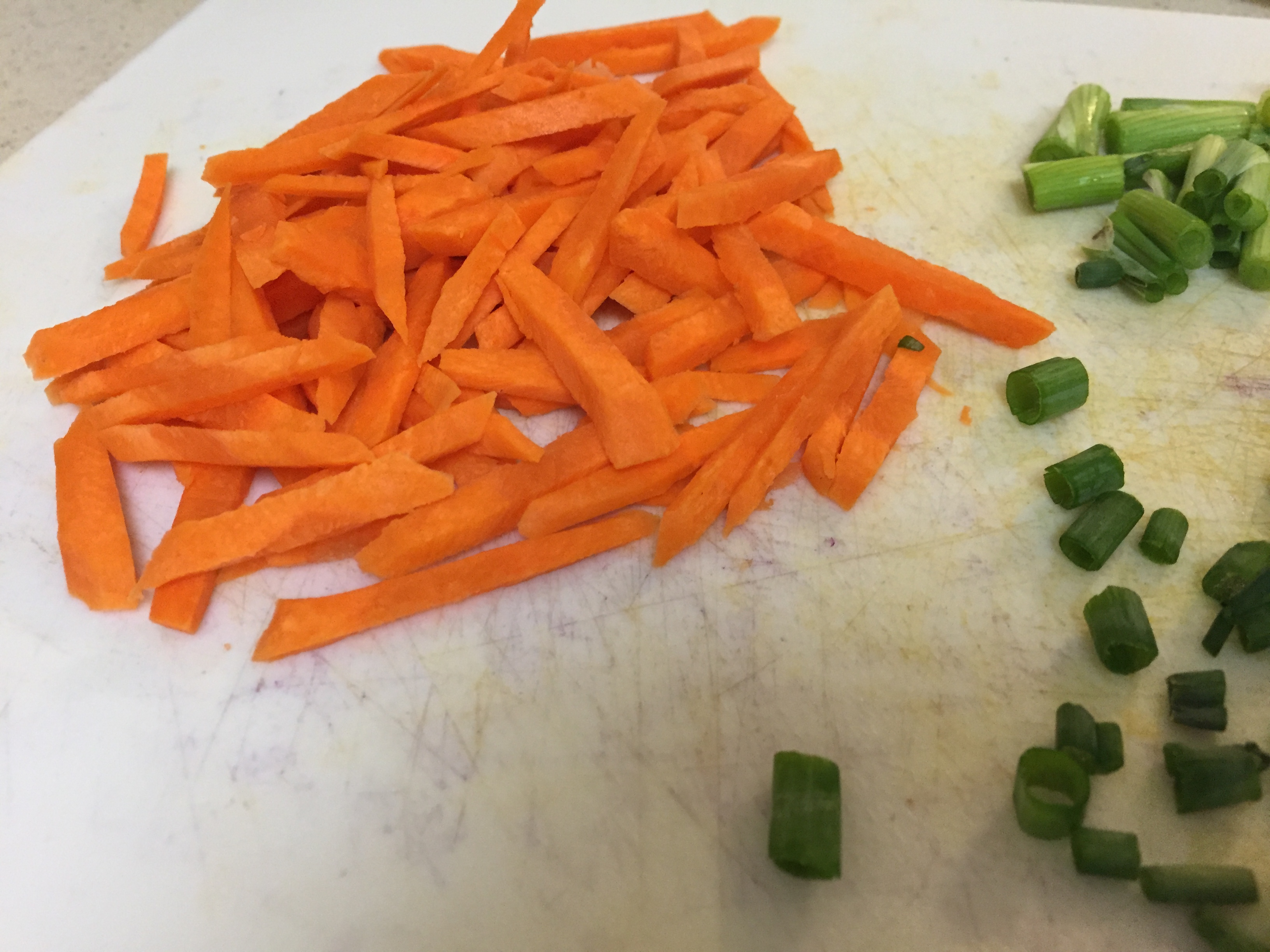 Of course, you need to reserve the green tops of the scallions to cut into a garnish for the finished dish.

So at this point it is a standard stir fry method: make sure the rice is going steady and on track to be done (you want to serve everything right away, so start the rice first), and finely dice a few cloves of garlic and an inch of ginger. Hot oil, same hot skillet you used to brown the tofu, and you’re on your way.

This time, I did an experiment: I wanted to see if the cabbage and carrots would benefit from some parboiling first. I probably overdid it, because in the finished dish they were too limp. So note for next time: either blanch them more quickly and shock them in ice water or don’t bother. I probably won’t bother. The cabbage water was really purple and they barely had any taste; because of the parboiling they also didn’t have much crunch. They were basically bulk, and not worth it apart from the color. The carrots were also softer than I like. Just make sure to add them early in the process so they have a chance to cook down some. Oh, and it felt a bit insubstantial still, so I also chopped up a handful of walnuts and tossed those in to take on some color and toast a bit.

By the time everything was nice and crisp-tender, I poured in a bit of seasoned rice vinegar, a bit of soy sauce, a spoon of hoisin (they have hoisin at the commissary!), and a splash of water to make it saucy. And it worked! Everything came together in an unctuous, silky feeling sauce. 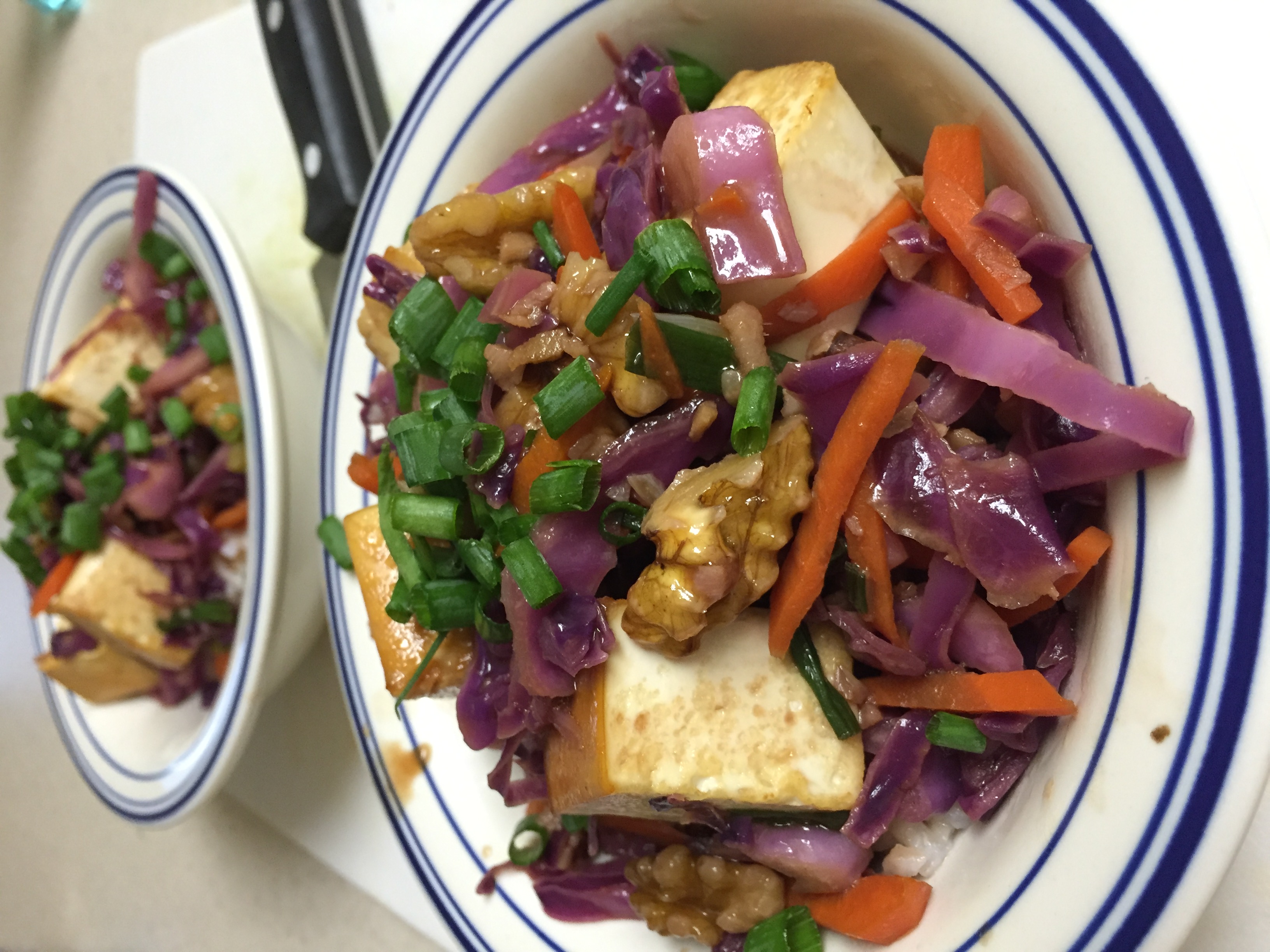 So the bowls go rice, the stir fry, the tofu, and then you spoon the sauce over everything and top with the sliced scallion greens. I can cut all the vegetables more finely when I have my knives again (I’m unwilling to risk a snipped finger for a dull loaner knife), and I can’t wait to have my archive of chiles and asian condiments back. But in the meantime, this is a very workable food solution.

Next up on the docket: there is a large population of Jamaican and Filipino workers here, which means the commissary actually stocks food for them. I saw a pile of taro potatoes, which I’ve never worked with before but I understand they make for a wonderful soup or stew. There are also packs of udon noodles, ingredients for chicken adobo, and all kinds of Jamaican-brand flavor packs on the shelves I don’t even know how to begin exploring apart from picking one at random and seeing what comes of it.

Plus, they stock my favorite brand of dry yeast (red star). Baguettes are on the way too.