The FBI is investigating a “drone” supposedly spotted near JFK Airport in New York City. An Alitalia pilot claims he saw, coming in to land, a small quadrotor “drone” flying within 200ft of his airplane. The real question is why such a thing would be flying 1,700 ft high near an airport, as the pilot alleges, when they’re supposed to be kept below 400ft. How he saw a small black aircraft “hovering” next to him while his 777 was going 160 miles an hour is… mysterious.

Such “drones” are really just widely available radio-controlled helicopters (like this one, of a similar size to what the pilot reported). Calling them drones the same way you’d call, say, a Predator a drone, is stretching the term a bit.

Regardless, the discussion about this incident reflects much of the science fictional aspect of the drones debate writ large… and how it’s nothing new. Brett Holman, an Australian historian who wrote his dissertation on the hype and panic over dirigibles and airships in pre-war England, has been tracking British media coverage of the new practice of air power over at his blog, Airminded. In a recent post, he publishes the following image and headline: 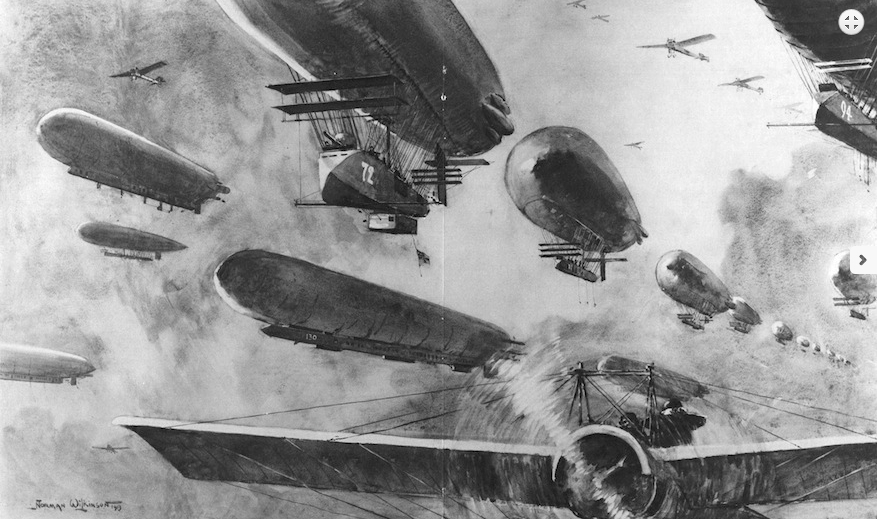 WILL IT EVER BE SO IN THE EASTERN SKY OVER ENGLAND? THE COMING OF THE BATTLE-DIRIGIBLES AND WAR-PLANES

As Dr. Holman recounts, the Brits were terrified of their vulnerability to these new flying weapons.

But the important point, says Flight, is that ‘if Germany wants to send airships to cruise over these islands there is no one to say her nay’, since Britain is so far behind in the air. ‘One of these days we may wake up.’

Of course, Britain did have something to fear from German air power. It just wasn’t the dirigible, which (like today’s drone) was slow and relatively easy to shoot down. Rather, Germany was working on the strategic bombing campaign, which is eventually executed in the London Blitz. In fact, the V-1 “Flying Bomb” was in many ways a drone, just not a very precise one.

But just because drones are old technology that doesn’t mean science fiction doesn’t pervade their discourse. Wired’s Danger Room blog, for example, is fond of calling Pentagon researchers “mad scientists” and drones “killer robots” in its coverage of these systems. Speculative articles about improved artificial intelligence drones are framed with imagery from a James Cameron film. PhDs at prominent think tanks have even compared them to the invention of the automobile.

The thing is, drones aren’t science fiction, and the reality of what they represent presents more than enough to worry about without the hype and sci-fi. But drones represent a political decision, not a sexy-seeming robotic nightmare scenario. It’s the policy, not the platform, that should be worrying everyone: the policy to kill without warning or hope for reprieve. That is the real issue we should be debating, not imaginations of the future.