In the aftermath of the horrifying election of a renowned fraud, attempted rapist, and proud racist to the Presidency, I have seen a lot of brow-beating by earnest liberals (and some gloating conservatives) whining about the breakdown of understanding in society. In the past, sometime, they argue, we used to trust and understand each other, and now that is gone.

I call bullshit. We understand each other now better than ever, and we have the Internet to thank for it. Because of the unfiltered, telepathy-like insight into each other we now have over Facebook, Twitter, Snapchat, and others, we are able to connect to the like-minded and distance ourselves from the distasteful in ways our forefathers could only dream of.

Think of it: in the past all we had to connect each other was geographic proximity and maybe membership in a club or a religion — essentially traditional civic institutions that would form the basis of a community. Moreover, you would only know what a person thought through careful, and often polite, conversation. Public civility used to be an institution in America. Civility also covered up a lot of ugliness: it used polite language to pretend that America was not a place of horrific oppression of otherness.  That is breaking down, and has serious downsides. But it also has some upsides, too. 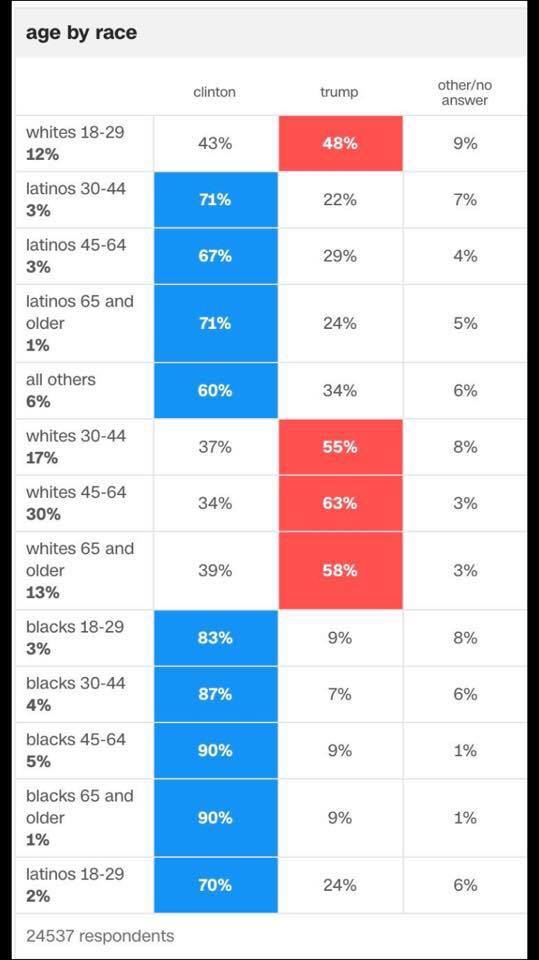 One of the glories of the internet is that we no longer need to be in geographic proximity in order to form a community. Like many things about the internet, it began with utopian intentions, but has had malign effects: yes, queers of color can form a support community, but so can the KKK (and the KKK outnumbers them, and is spreading its wings now). And in this election, people organized around race (before you even bring up the economy, do not bother: if it was the economy then you’d see people of color voting for Trump but they simply did not). Because of a deliberate social media strategy by the Trump campaign, primarily white people organized around the idea of excluding immigrants, people of color, and LGBT people from participating in the economy and mainstream American society.

So our problem isn’t a lack of understanding, but perhaps too much understanding: we have too much knowledge of the vile things our friends and relations think, and it has resulted in social fracture. The tool meant to bring us together in a new libertarian utopia, the internet, has instead become the wedge that is driving us apart.

And while we lament that, let us also reflect on the imagined golden age of mutual understanding in America. For many supporters of President-elect Trump it is the 1950s. In a recent survey, 70% of people who said they were voting for Trump imagined the 1950s as a blissful era in America, where communities felt whole and the country felt “right.”

In other words, a supermajority of Trump supporters long for the days before the Civil Rights Movement, before women’s liberation, before the normalization of gay rights. And the 1950s were indeed an awesome time in America so long as you weren’t black, female, or gay. Suppressing minorities has been a long-term fixture of this country, and it has re-intensified after the Supreme Court chose to disable the Voting Rights Act (the Republican party undertook a massive effort to prevent black and brown people from voting this year, and it worked).

Looking further back into our history, can anyone really say we understood each other better in the 19th century — during Reconstruction, the Civil War, the Antebellum South, or Nat Turner’s rebellion? Back when a fifth of the country was treated like property and horrifically abused and stolen from, when our forefathers committed genocide on a continental scale to steal people’s land and confine them to reservations?

The reality is that our understanding of each other is better than it ever has been. And, while the results are ugly, this is a great thing for our future. We can no longer pretend our demons are invisible: they are there, confronting us, every single day. Every time someone is called a racial epithet and takes to social media to tell their story, we have to confront the very real racism that still pervades us as a society. Every single time a Muslim woman has her hijab ripped off, every time a queer person is beaten in the street, or a woman has her crotch grabbed, Trump-style, we are being forced to confront the ugliness that is at the core of our culture.

I’ve seen many pundits saying these are not our values — that racism, sexism, xenophobia, homophobia, and so on — but that is a lie. These are inherent American values. We should want to change them, because they are garbage values. And now, we no longer have the luxury of pretending they aren’t our values.

This should be a wake up call. America has some genuine rot at its core, and we thought electing Barack Obama would cleanse that rot. It did not. Like all cancers, it is putting up a fight while we work to excise it. But now, we have the best imagery we have ever had about where it lurks, and who it has captured. Starting this week, we have no excuse for pretending it isn’t innate to what we are, as a people.

There is a lot of work ahead. But at least now we have an idea of its scope. It is massive, but it is not insurmountable.