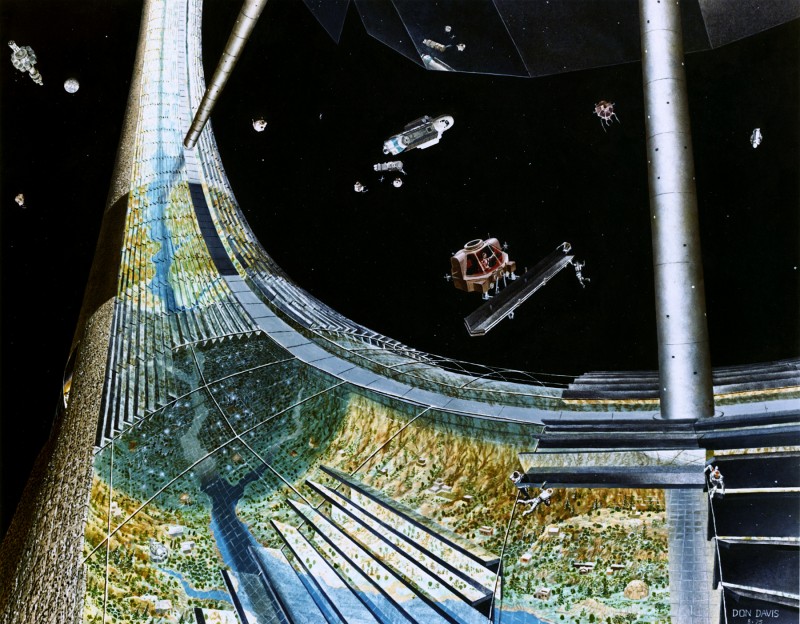 This post is part of an on-going series. See the other posts here.

There is a great post over at SF Signal by author Rob Boffard, about the feasibility of constructing a large-scale permanent habitat in orbit over Earth. It’s a neat thought experiment:

Getting stuff into space, and keeping it there, is hideously expensive. Even something as low-tech as sending an object weighing no more than three pounds into the stratosphere on a balloon (as my publisher and I did with my second book – for the lulz, OK?) costs a couple of thousand dollars. The International Space Station, which is a good deal higher up, has cost the planet approximately $150bn, which includes materials, crew costs, labour and launch. This for an apartment-sized set of modules that can house a maximum of six people.

If anything, this underestimates the actual costs of launching huge chunks of metal and thousands of people into orbit. Boffard uses a medium-sized city as an idea of a large-scale habitat, which would be around 60,000 people or so, with numbers from NASA he suggests it would cost $75 trillion. (For some reason, Boffard says such a sum “is a good deal more, by an order of magnitude, than the total GDP of the entire planet” but he’s wrong: according to the World Bank, the global GDP was around $77 trillion in 2014.)

The cost of a permanent space colony is not just the mass of everything you’re sending up divided by the cost of operating a rocket. The research and development costs of, say, figuring out how to create centrifugal gravity, or creating enough shielding to keep cancer rates to around what they are on earth are (sorry) astronomical — at least if you don’t want to sheath everything in a few inches of lead, which would be unfathomably expensive to launch for a habitat big enough to house and feed 60,000 people. Similarly, while Boffard hand-waves away the difficulty of building an ecosystem that can sustain human life, it is actually an incredibly complex, difficult, expensive challenge that we have not yet been able to master here (consider the utter failure of Biosphere 2 in Arizona).

But there is a deeper question about the prospects of building a mega-structure in space to house tens of thousands of people, one that Boffard elides in the breezy attempt to portray it as a simple matter of scaling current engineering: why?

To be precise, why would you want to send 60,000 people — or hell, even 10,000 people — into space? What possible economic gains do you get from such an endeavor, to justify that exorbitant cost?

The cost of space travel is easier to justify for small scale science research projects — the ISS, for example, or a small habitat on Mars where scientists can study the environment. There is even a case to be made for deep space science stations (something NASA is working on right now, actually). That is because the purpose of these small scale habitats is not generating a functioning economy and society; their purpose is to advance knowledge, which is not always inherently economic activity.

Few advocates of space colonization can answer the basic question of why you would want to send 60,000 people into a fragile environment where irresponsibility can kill thousands and doom the colony. There is — maybe! — a case to be made for building a tourist hotel in low Earth orbit, using one of the many commercial spaceflight systems being built right now, whether SpaceX or Blue Origin or Virgin Galactic. But even suborbital flights on Richard Branson’s planes cost $250,000, which is about the average cost of a home in the United States (which few can afford and must mortgage over 30 years). And that’s just for a quick squirt up to the edge of space and a few minutes of weightlessness.

But as all travelers know, there is a yuuuuuge difference between visiting a place and actually living there. Once people are living permanently in an orbital habitat, what would they do that they can’t do on Earth? That isn’t clear at all, and there is currently no viable economic case for why anyone would spend the entire GDP of planet Earth for a year to get them there. There simply isn’t a reason, beyond elite prestige reasons (as Boffard put it, “living in an enormous habitat which validates humanity’s awesomeness”), to placing information workers in orbit. And the hype about mining asteroids aside, it isn’t at all clear that you can actually send enough raw ores back down the gravity well to manufacturing on Earth to justify the cost of launching a space probe to lasso a giant hunk of rock such that it doesn’t accidentally burn up in the atmosphere.

So orbital habitats don’t make any sense at all for permanent human habitation, at least on a large scale, at least on any time frame that would make our children or grandchildren want to build them. Orbital habitats do make a convenient place for research, for logistics hubs (say, as a refueling depot) and as a quick launch pad for a rescue mission or something. But there’s no economically justifiable reason to take tens of thousands of people into fragile rotating tubes and just sit there, in space.

There is a better case to be made for a permanent colony somewhere like the moon. For one, the engineering is simpler, since you don’t have to worry about the complex engineering of balancing centripetal forces in a rotating environment. Radiation shielding is easier, since you don’t need to launch it into orbit, you can just bury your habitats under lunar regolith. And the moon has water ice, which you can mine for water, so you won’t have to worry about creating a closed loop for water and oxygen recovery. The infrastructure needed to keep it going is at least easier, because there are resources there, on the ground already, that you can exploit to make life happen.

But logistics aside, you still run into the big question of why. A permanent research station on the moon makes sense, because there are lots of things we can learn from long-term habitation in a low gravity environment, that will teach us about our ability to live elsewhere in the universe. A permanent colony, however, with thousands of people, is a harder project to justify. It might be something political pioneers want to do, to form a commune or a Heinlein-style Ayn Randarchy somewhere, but there still isn’t a solid economic reason to do it. I can’t see a project like that scaling until people figure out some sort of comparative advantage that you get from such a place (this is something I explore in my newest short story, “Blood Moon“).

Does this mean no one should try to build such a thing? No! But until the question of why anyone would invest in creating a massive space colony is answered convincingly, I don’t see them happening. We need a reason to build out into space, one that can justify the extremely high cost of doing so. If living permanently in space had obvious logic, then we’d be living permanently in space. But the goodness of living there is an assumption of space colonization advocates, something they haven’t yet persuaded any government or corporation to take on as a primary goal (again, this is besides the hype some entrepreneurs build up as a halo marketing gimmick). Sure, you can make the eggs-in-a-basket case that people like Elon Musk and Stephen Hawking do for living on other planets, but that doesn’t create a viable society; it’s just a statement of principles. In order to build a permanent human presence in space, there needs to be a reason for it beyond coolness or abstract assumptions of planetary catastrophe. So far, in all the hullabaloo about reaching for the stars and planets, that just doesn’t exist yet.