Updated as of August 15, 2013. An important new profile of Laura Poitras in the New York Times Magazine by Peter Maass presents lots of new information. It is worth reading in full, and will be referenced multiple times here. I’ve also not tried to deconflict the many times Greenwald claims he was “first” in touch with Snowden — the dates can be anywhere from November of 2012 to February or April of 2013. In different interviews, he suggests different dates, and I lack the means to determine which one is true. This update also includes revelations that Snowden may have begun stealing documents from the NSA as early as April, 2012, while working as a contractor with Dell.

Edward Snowden’s leak did not happen in a vacuum. He was helped by a network of associates, all with varying ties to either Wikileaks or the Russian government (in some cases, both).

It’s easy to get caught up in the daily news and speculation about Edward Snowden and his flight from America to Russia. But there has never been, as best I can tell, a timeline published of Snowden’s decision to leak documents and flee the country, along with who helped him do it. I’ve assembled a first-round try at such a timeline here — it is suggestive of many things, including the unsavory nature of many of the characters involved and a clear, long-standing involvement with Wikileaks (and their relationship with the Russian government), but nothing is very conclusive. As we learn more, it will be updated.

This timeline does not try to chart Snowden’s previous online activities, but because of his close association with Wikileaks after fleeing the country — and the complicated relationship between Wikileaks and the government of Russia — that background is included. This timeline is composed of publicly available news stories, videos, and other data highlighting both Snowden’s decisions and those of his associates. It is not a case for his guilt or innocence of any alleged crimes.

Snowden (& Associates) Timeline: (zoom in on the timeline to get a clearer breakdown of key events)

October 26, 2010: Wikileaks founder Julian Assange tells pro-government Izvestia: “We have [compromising materials] about Russia, about your government and businessmen,but not as much as we’d like… We will publish these materials soon.”

November 2, 2010: An official at the Center for Information Security of the FSB, Russia’s secret police, told the independent Russian news website LifeNews “It’s essential to remember that given the will and the relevant orders, [WikiLeaks] can be made inaccessible forever.”

December, 2010: Israel Shamir, a long-standing associate of Wikileaks traveled to Belarus, a close ally of Russia, in December with a cache of Wikileaks files. Belarussian authorities published the cables and cracked down, harshly, on pro-democracy activists.

January, 2011: According to a reporter for Kommersant, Shamir offered to sell articles based on the Wikileaks cables for $10,000 (£6,300). The Russian Interfax news agency reported that Shamir was WikiLeaks’ “Russian representative”, and had “confirmed the existence of the Belarus dossier”.

April, 2012: Former intelligence contractor Edward Snowden began downloading documents describing the U.S. government’s electronic spying programs while he was working for Dell Inc in April 2012, almost a year earlier than previously reported, according to U.S. officials and other sources familiar with the matter.

July 18, 2012: Wikileaks is reported to be nearing bankruptcy due to a freeze-out by banks.

December 2012: Freedom of the Press Foundation, which has Glenn Greenwald and documentary filmmaker Laura Poitras on their board of directors, announces their launch with the explicit purpose of funneling money to Wikileaks.

December 2012: According to Glenn Greenwald, Edward Snowden first emailed him, anonymously. In an interview with Harpers, Greenwald says he initially ignored the emails.

January, 2013: Edward Snowden contacted documentary filmmaker Laura Poitras, according to an interview in Salon. Poitras notes her familiarity with encryption methods thanks to her close contact with Wikileaks for a previous film, and her involvement with TOR developer and hacker Jacob Appelbaum (who was investigated for his ties to Wikileaks in 2011).

February-May 2013: Snowden exchanges emails with Greenwald and Poitras, according to the Washington Post, but does not reveal his identity.

March, 2013: Snowden takes “infrastructure analyst” job at Booz Allen Hamilton for the explicit purpose of stealing documents from the NSA, according to an interview he gave the South China Morning Post.

**April, 2013: **Jacob Appelbaum goes on vacation in Hawaii, according to a June 25 talk he gave in Berlin (approximately 25:30 into the video). He does not report having any contact with Snowden. (H/T to @Libertylynx for finding that video).

**May 1, 2013: **A real estate agent in Hawaii says Snowden and his girlfriend moved out of their house, but did not know where they went afterward.

May, 2013: Poitras and Appelbaum conduct an interview via encrypted email with Snowden, asking detailed technical questions to ensure Snowden possessed the skills and knowledge he claimed. Appelbaum says in an interview in Der Spiegel that he did not know Snowden’s identity. Appelbaum does not release any further details about the content of the technical discussion.

Early May, 2013: Snowden “indirectly” contacts Barton Gellman (the meaning of “indirectly” is unclear), who begins working on the PRISM story at the Washington Post.

May 16, 2013: Snowden directly communicates with Gellman for the first time (the meanings of “direct” and “indirect” are unclear).

May 24, 2013: Snowden tells Gellman of his desire to apply for asylum in Iceland, then asks Gellman to “publish — within 72 hours — the full text of a PowerPoint presentation describing PRISM.” When Gellman balks, Snowden apparently contacts Greenwald.

June 6, 2013: The Guardian publishes the first in its ongoing cache of documents provided by Snowden.

June 9, 2013: The Guardian reveals Edward Snowden as the source of the leaks and publishes the first of two video interviews with him. Snowden says of his leaking: “I have no intention of hiding who I am because I know I have done nothing wrong.”

June 10, 2013: Wikileaks founder Julian Assange praises Snowden as a hero from the Ecuadorian embassy in London.

June 10, 2013: Snowden checks out of the Mira Hotel in Hong Kong, whereabouts unknown.

June 22, 2013: A New York Times story included “a person familiar with the case” saying Snowden was staying at an apartment under Hong Kong police protection. It is removed within 24 hours.

June 23, 2013: Snowden leaves for Moscow. The Wall Street Journal reports that Wikileaks advised Snowden to leave Hong Kong; fearing a loss of internet access, he does. Wikileaks tweets that they “assisted Mr. Snowden’s political asylum in a democratic country.” A source tells the WSJ no Chinese officials were involved in his departure; a New York Times report disagrees. Izvestia, a state-owned Russian newspaper, writes that the Kremlin and its intelligence services collaborated with Wikileaks to help Snowden escape from Hong Kong (Wikileaks did not mention any official involvement in Snowden’s departure from Hong Kong in their press statements).

June 26, 2013: Olga Bychkova, a host from radio Echo of Moscow, tells Anna Nemtsova, “I saw about 20 Russian officials, supposedly FSB [security service] agents in suits, crowding around somebody in a restricted area of the airport,” Bychkova told me. “The Kremlin pretends they have nothing to do with him being stuck in Moscow, but in reality they’re all over him.”

**July 12, 2013: **Snowden convenes a press conference in Moscow in conjunction with Sheremtyevo Airport officials, where he praises the human rights records of Russia, Venezuela, and Ecuador, and announces his decision to apply for asylum in Russia.

July 12, 2013: Snowden calls Russian lawyer Anatoly Kucherena “by telephone” asking for his help, the lawyer tells the AFP. Kucherena sits on the Public Council of the FSB (Russia’s successor to the KGB), whose 15 members must be approved by the FSB chief.

**July 22, 2013: **An unverified report in RBK Daily says the regional head of the Union of Veterans of the Police and Security Services claims Snowden requested assistance from them from an email whose IP was traced to North Carolina. They reportedly offered him assistance, but Snowden’s lawyer has not publicly responded to their offer.

**July 23, 2013: **Snowden tells state-owned media of his intention to settle and find work in Russia.

July 24, 2013: Kucherena, the FSB lawyer assisting Snowden, says he is responsible for managing his money, providing books to read, and fresh clothes. 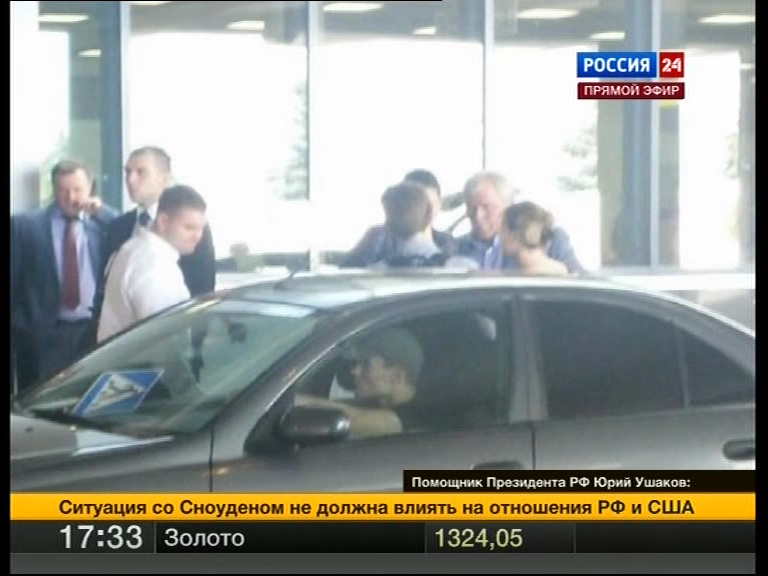 August 1, 2013: Snowden is granted a 1-year temporary asylum by the Russian government. He is seen leaving the airport with Sarah Harrison, Wikileaks’ legal advisor, who says she stayed with him during his entire five-week stay in the airport. Wikileaks also says Harrison arranged for his exit from Hong Kong.  Wikileaks then thanks the Russian people (and, implicitly, government) for helping them “win the battle,” presumably over Snowden, and hoping then get to “win the war,” apparently on secrecy.

**August 9, 2013: **Wikileaks sets up the “Journalistic Source Protection Fund,” and claims to have immediately raised approximately $12,000 in its first week. Wikileaks also begins selling Edward Snowden-brand t-shirts. They do not say whether proceeds from the sales go to benefit Snowden.

August 12, 2013: Greenwald is found to be shopping around an exclusive TV interview with Snowden, reportedly for $50,000.