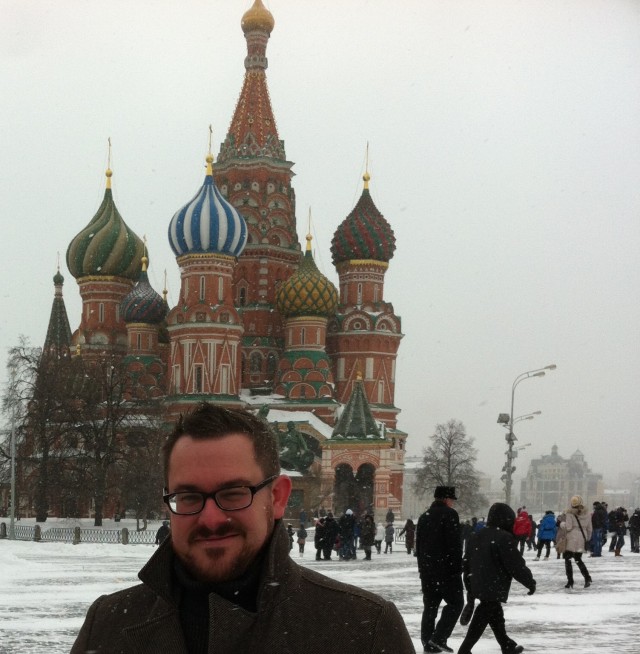 Me, in Red Square.

This week I attended a trilateral dialogue in Moscow about “New Euro-Atlanticism” and whether Russia can be brought into the fold as a constructive partner. I’ll have some more thoughts in my column this week for PBS, but one thing leapt out at me: the old timers have romantic notions about rapproachment with Russia, and dreams of the old Atlantic alliance finally triumphing over the Reds.

I was 10 when the USSR collapsed. The Cold War was never a daily reality to me, and I certainly didn’t have any formative experiences as an adolescent or adult that gave me some sort of instinctive wonder at not being Russia’s official enemy anymore.

But I’ve noticed that those who get too deep into the partisan disputes over relations between the U.S. and the Former Soviet Union – not in a Republican-Democrat sense but being wrapped up in legacy assumptions about what Russia must be – really lose any sense of perspective. So my question to the group (“why is a functional, pragmatic, transactional relationship with Moscow such a bad thing?”) was answered by a rather vague statement (“of course we have a common fate with Russia, it will just take 20 years to realize it”) that’s grounded firmly in Cold War politics and assumptions.

There is a different way of approaching these questions, I think, and I can’t think of a better name for it than The New Relativism. This isn’t like the PC version of the term of trying to explain away horrific abuses as “cultural.” Rather, it’s trying to empathize with the constraints and incentives that cause certain kinds of rhetoric or policies to come out of relatively opaque political systems. So, while Russia’s crackdown on foreign NGOs is an objective bad, it also has perfectly understandable roots that might suggest a different way of approaching the country.

I don’t have this idea very well formed yet, and I don’t think it’s terribly original. But the entrenchment of old ways of thinking about US-Russia relations is, I think, paradoxically making the prospects of a future de-escalated relationship less likely. Our high expectations only set us up for failure, leading to burned feelings on both sides.

I guess I need to think about this more, but it strikes me as incredibly important, and possibly pointing to a bigger breakdown that’s starting to peek its head over the horizon.