A few years ago, and with great fanfare, Omni, the legendary science fiction magazine financed by Penthouse publisher Bob Guccione, relaunched. Edited by conceptual pop artist Claire Evans (one half of the band YACHT), it was meant to usher in a new golden era of forward-looking science fiction and discussion about the future.

About a year later, Evans left to run a technology vertical for Vice and write monthly futurist columns for Grantland. But Omni, which adopted the name Omni Reboot, kept publishing — some clickbait top-ten lists, some short fiction, and some analytic and critical articles. An eclectic mix, to be sure, but also appealing in its own way.

It was looking into this mixture — a high profile brand name, mostly, with room for some cool speculative pieces — that I decided to submit a short story I had written. Originally composed for my friend August Cole’s Art of Future Warfare project at the Atlantic Council (I withdrew it for a bunch of reasons I’d rather not recount here), I eventually gathered myself to re-edit it, expand it a bit, and try submitting it to be published elsewhere. A breezy story about hacking gone wrong on the moon, OmniReboot seemed an organic place to run it.

So, I went into Submittable and uploaded the word document. And then… nothing. Weeks and weeks of nothing. This is normal as far as fiction goes — unless you are submitting to an absolutely top flight magazine (think The New Yorker), it’s rare to get a response in anything less than months. It’s a bit different online, where response times in general are faster, so eventually, I grew uneasy with how long my submission languished without even an acknowledgment of receipt. I clicked around their website and saw nothing — it didn’t even look like they were publishing fiction for several weeks anyway. So I withdrew my story and submitted it to other outlets. 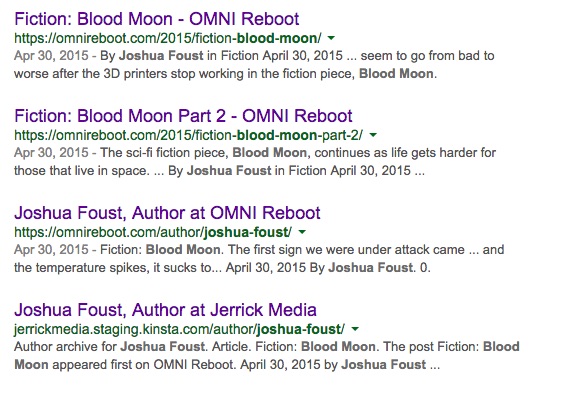 Then, this week, I stumbled across this search image to the right. Huh. Here’s the thing with submitting a story — any story — to a journal. It is the establishment of a relationship. Most outlets, especially those that do not pay, lightly edit your work if at all, but at the very least run a version by you to make sure it meets your vision. Quite unlike non-fiction writing, which I have spent most of my career doing, it is not essential to make sure facts are correct, and it’s rare that an accepted story needs to be significantly edited for clarity or length (if it did, the journal would reject it anyway, since editing is hard work and they are chronically understaffed and overworked). But at the very least, you agree to lend them your words and they agree to make it pretty in some way and get it out there with some legitimacy attached to it.

But just submitting a work to a magazine does not grant them permission to do anything. The submission process is asking the editors if your work has merit. It is not a granting of rights to publish, and it is certainly not granting them the right to profit from that work. Rights to published writing matters: it is the question of who owns it for what period of time (almost all work reverts to the author after a period of time, depending on the contract), it is the question of who can republish it, who can base future works off of it, and so on. The rights question determines everything: if I sign away exclusive rights to a story in perpetuity, I cannot base future stories off of it, I cannot republish it on my blog, and so on, without their permission first. More to the point, Omni Reboot has a history (that I learned of sadly too late) of treating the rights of its writers with utter contempt, then apologizing and backtracking when called out on it publicly.

So when I saw Omni Reboot had not only published my story without seeking my permission for it, but had been promoting it on their twitter feed no less, I was taken aback. It is a fundamentally unethical thing to do. The story itself was loaded with links someone added to their Amazon Affiliates page, so they were gathering advertising revenue and royalties from the link behavior. However small in amount, they were profiting from posting my work without my consent. Someone there made a deliberate decision to publish my work, after breaking it into two separate pieces for better pagination (and thus ad buys), and never thought to tell me about it or get me to sign over my rights to them.

When I challenged them on Twitter and Facebook, the tweet they had posted disappeared without comment. On Facebook, the post has remained up, at least as of mid-morning. And the silence from Omni Reboot on this front has been extremely disheartening. They stole my work, and they never told me. This unethical behavior is not just a jerk to move; it is act of theft, and they need to not only take it down but apologize to me.

In the meantime, I strongly suggest you avoid submitting work to them. There is no reason to expect they will treat your work respectfully in the future.

<img src="../images/2015/Untitled.jpg align=“right” />Update: The Omni Reboot Facebook account responded to me, and apologized for it, blaming ” the midst of multiple turnovers within the content staff of OMNI Reboot.” The account continued, saying “It appears that there was a miscommunication regarding which of our submitters had been contacted and had responded with contracts.” And they took down my story. My author page is now blank, though I am still listed as an author on their listing page. I hope they take my name off their website, as  I shall never be submitting work to them every again.

Omni Reboot have been quietly deleting the references to their theft of my work from their website and social media. I don’t think that fair of them: I am owed not just an anonymous apology via Facebook messenger, but a proper one attached to a name. I would prefer in public but that isn’t entirely necessary — but they do owe me, and their readers (and future contributors!) an acknowledgment that this was a serious ethical breach and the steps they are going to take to ensure it does not happen again.

I have a feeling I will be waiting for that for a long time.