Update: As if to prove my point, below, a veritable cavalcade of angry, anonymous commenters flooded this site’s comments section, forcing me to shut them down for the foreseeable future. To my fellow journalists — every time you laud Greenwald’s journalism, please consider the horrific damage he is doing to free speech and discourse through his reckless and unethical conduct. The original post continues below.

Today Glenn Greenwald twitter-linked to a blogpost claiming to raise “troubling questions” about my past as a defense contractor. (Naturally it was mirrored by Wikileaks, since Greenwald is the only human they follow on Twitter). The clear implication is that this past is why I fact-check the many falsehoods, omissions, and half-truths being printed as fact in our ever-widening debate about surveillance, national security, and privacy. Worse still: the rumor is that I not only have these financial interests, I don’t disclose them to my readers when writing about national security. In this formulation, I am therefore either a hypocrite, an unreliable source for analysis, or a lying monster (it has varied).

Let’s ignore the obviously ad hominem nature of this criticism and settle the facts first: none of that is true. To be more blunt: it is a lie. I have not received a penny from the U.S. government since leaving my job as a contractor on January 5, 2010. Since leaving my think tank in February, I have tried to generate income by writing freelance — this has often taken the form of writing articles for various publications; it has sometimes taken the form of doing research for various think tanks and organizations around Washington, DC (you can see one such paper, an analysis of the Department of Justice’s Office of Legal Counsel white paper on the targeted killing of American citizens, here). I had hopes that I might be able to secure some subcontractual jobs doing identical work for the U.S. government, but alas — I never did. Such is the life when you are in business for yourself: you have to behave like a business and seek paying work to remain solvent.

Even so, the single line on my LinkedIn profile (since removed) that I am available to consult for “government entities” prompted several people on twitter to suggest that everything I write is due to having a financial stake in the so-called “national security state.” It is a familiar slur, one Glenn Greenwald in particular is fond of promulgating against those with whom he disagrees (there are many examples of him doing so at the Daily Banter). In the logical universe Greenwald has constructed for his fanbase, any disagreement is evidence of mendacity — an issue many who have disagreed with his analysis have come to realize, often to their lasting regret.

This problem is compounded by the nature of Greenwald’s avid fans. Not only is he the source of abusive language, but whenever he tweets or casually mentions a public figure in a denigrating way dozens of random, low-follower twitter accounts emerge from the dark recesses of the interwebs to heap vicious personal scorn, verbal abuse, obscenity, homophobia, and even death threats upon the hapless victim (I have experienced all of these in just the last twenty-four hours). Thus, when Greenwald passive-aggressively suggests that someone “ needs to write this up into a coherent whole,” it’s difficult to take as anything other than a threat. 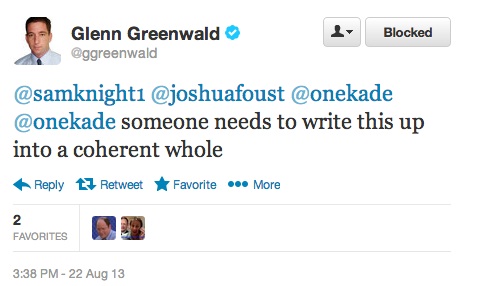 Look, I did work with the U.S. government – for several years. This is neither hidden nor secreted away. It is openly stated on my biography page, and on the “previous work” section of my LinkedIn profile. Not only do I not try to hide this information, I actively trade on it. The reason I am given credibility to discuss national security issues in the public sphere is because I am open about my old employment as a senior intelligence analyst for the dreaded national security state. I built my current career on that, in fact. So the nasty little slander that I somehow hide this fact from anyone is just that — a nasty little slur.

Greenwald in particular should know better. He tried this gambit once before, in 2010. Then, as the Wikileaks scandal was just cresting, he wrote a nasty little multi-thousand-word screed where he accused me of being a “royal court hanger-on” for the military, among other supposed crimes. Then, as now, it was a needless, vicious slur (I responded in full at the time).

What makes any tiff with Greenwald so exhausting is not just the needlessly personal nature of his attacks, but rather his outright lies. That’s correct: Glenn Greenwald is a serial liar. He is pathological about it. And he pretends like people are too dumb to notice. He did this in 2010. On the morning of November 30, 2010, he tweeted this about me: 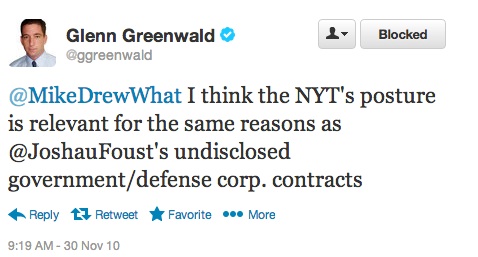 Notice the familiar slander, that I had undisclosed contracts? It wasn’t true at the time — I even wrote in the New York Times that I worked at a defense contractor! — he “discovered” my “undisclosed” ties by looking at… my LinkedIn profile. But, almost casually, he lied about it just a few hours later. 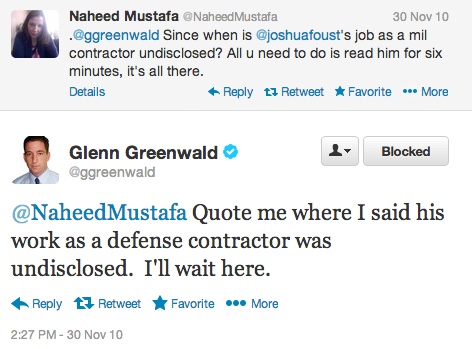 For reasons that escape me, very few people like to grapple with the casual way Glenn Greenwald lies, almost constantly. He lied about me again, earlier this year, when he falsely accused me of supporting the wars in Libya and Mali. 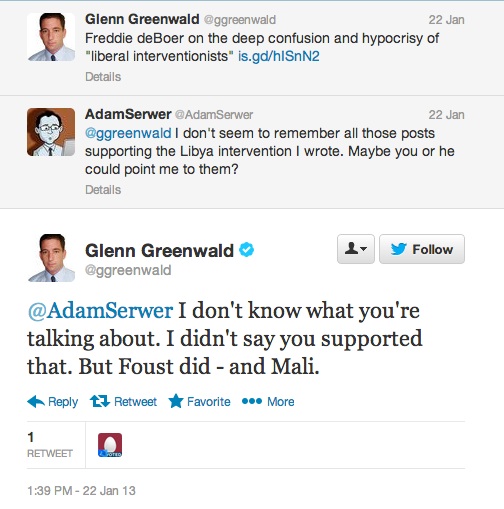 Like so many of Greenwald’s lies, this one is not just wrong it is hilariously wrong, considering the tens of thousand of words I wrote in opposition to the intervention in Libya. It was completely pointless. I demanded a retraction from Greenwald, and he refused. He chose to stand by his lies.

Because he is not only a pathological liar but also a bully, very few in the public sphere ever want to stand up for him. In fact, more than one journalist has written me a private note of encouragement in standing up to Greenwald, because for them the professional consequences of fighting off his bulling followers and rebutting all of his lazy lies are simple too overwhelming. So he is allowed to continue lying and bullying people without recourse.

The consequences of this allowance are astonishing. When his partner, David Miranda, was detained on Sunday by the authorities at Heathrow Airport, Greenwald was in fine form expressing outrage. Here, too, he simply lied — openly. Greenwald wrote that Miranda was “not allowed to have a lawyer present,” and portrayed his detention as the baseless harassment of a family member.

In short order it emerged that Miranda’s trip was actually funded by the Guardian, and his specific purpose was to carry top secret government files between Rio de Janeiro and Berlin to Laura Poitras, the filmmaker who is collaborating with Greenwald on his NSA stories. Moreover, the Guardian later reported that Miranda was: a) offered legal representation in accordance with British law, an offer Miranda rejected; and b) allowed to have a lawyer present for the last 90 minutes of his detention.

There is no other way to describe Glenn Greenwald’s initial reaction: it was knowingly, deliberately, false. Yet again, he lied. But the damage was already done. Hordes of angry twitter followers flooded the internets to angrily dispute any deviation from his original lies about the incident, shouting down all who dared to point out the very simple truth that he lied. Again.

This is why I take his threats, casual slurs, and obfuscations so seriously. It is not the harmless game of someone with a loud mouth. Glenn Greenwald’s lies have serious consequences. At this point, his constant lying is affecting not only the people he lies about, but is contributing to a tremendous self-censorship by those who see his lies and want to rebut them but are terrified of his swarm of bullies ruining their days or their lives.

It is inexplicable that so few have ever called him out by name for such deplorable, unethical behavior. So I am doing it as plainly as I possibly can. Glenn Greenwald is a serial liar. He is a bully. And he has no business being taken seriously ever again.

P.S. While we’re on the subject of secret, undisclosed ties to the government, let’s revisit the timeline of events in Miranda’s detention at Heathrow. By his own admission, Greenwald was able to mobilize both Brazil’s foreign minister and London ambassador. Did anyone find it remarkable that a foreign journalist could marshall the senior officials of a 200 million person country on less than an hour’s notice? I did. I also found it remarkable how Greenwald — an outspoken defender of journalism, and a vocal critic of any attempt to interfere with journalism — was absolutely silent about Brazil’s massive protest movement that resulted in the]11 (and deaths) of the journalists covering it. In fact, murdering journalists is depressingly routine in Brazil. It happens all the time.

In fact, Brazil, where Greenwald says he lives because he can be free there, is actually famous for its incredibly violent police force, especially if you happen to be poor and living in a slum of his adopted hometown of Rio de Janeiro.

I can’t fathom why Greenwald, who relies on the good graces of Brasilia to live with his partner and continue writing, would ignore such appalling government violence while shrieking at the top of his lungs about American surveillance (please, for the love of God, Glenn, don’t write about Brazil’s massive domestic surveillance apparatus, the proliferation of private militaries, or its growing use of drones to squash protests). It’s a total mystery, right?

Maybe I should add “hypocrite” to the top of this post.