This past week, Representative Alexandria Ocasio-Cortez and her colleague Representative Ilhan Omar played a video game on the Twitch streaming service, part of a get-out-the-vote effort that attracted over 400,000 spectators. The audience numbers were substantial all on their own, the third-largest ever on Twitch, which makes it a significant event. But what makes her stream even more significant is what it represents.

There’s no other way to put it: the next generation of voters is on Twitch. While it’s true that AOC is uniquely skilled at communication, and has an intuitive knack for speaking fluently in internet cultural slang while also explaining complex policy succinctly (and honestly, I do not want to underplay this — she is an enormously talented communicator, like once-in-a-generation talented), her choice of platform also matters. 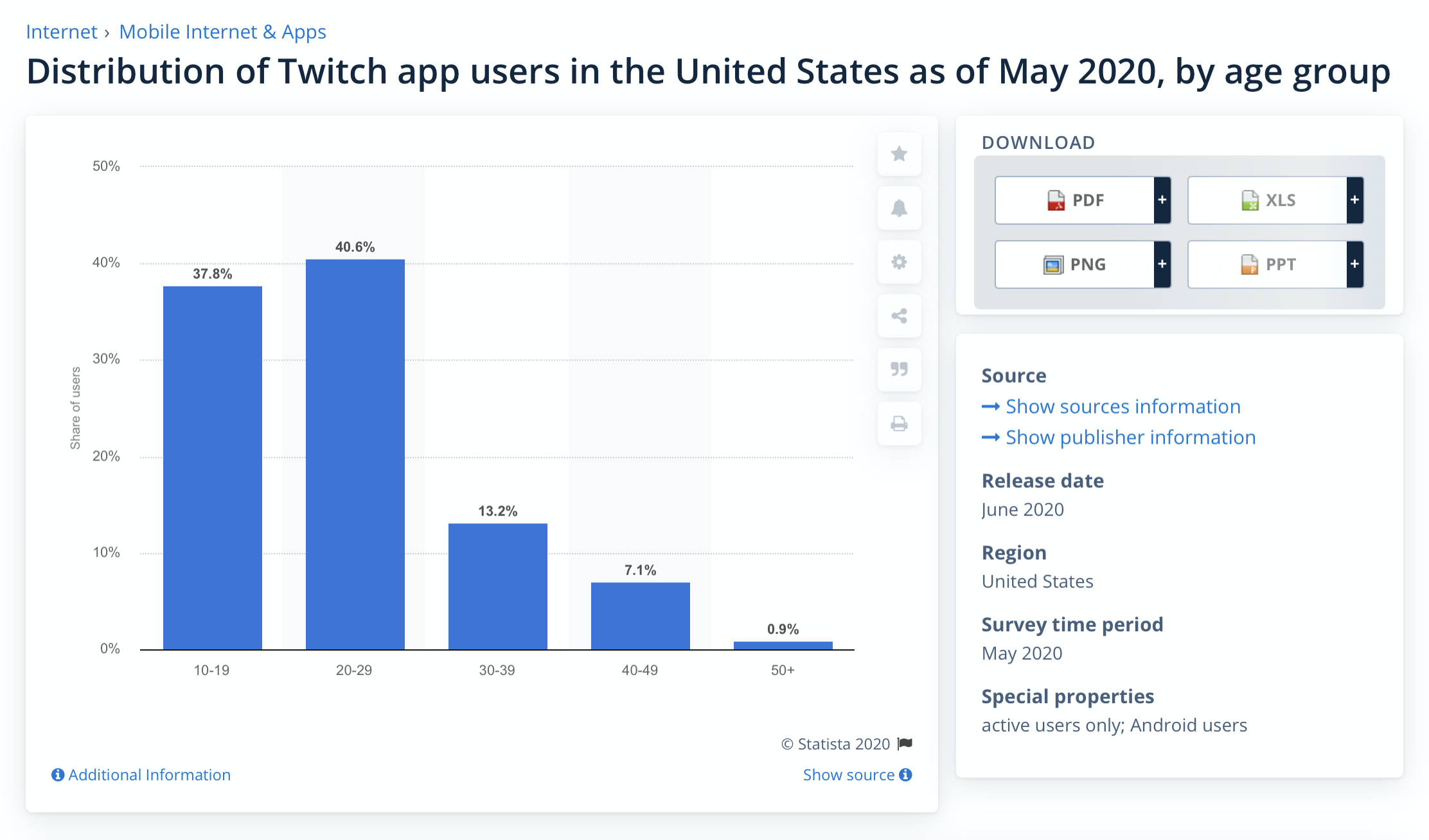 Within the US, Twitch users skew heavily toward people under 30, according to this chart from Statista. This group of ages is the tail end of the much-maligned-by-Boomers Millennial generation and incorporates a huge chunk of Generation Z. This age cohort spends a huge chunk of their daily lives watching game streaming — and spends money doing it (subscribing to a streamer on Twitch costs money, some of which goes to the streamer and some to Twitch itself; AOC donated her stream revenue to a get-out-the-vote organization).

It’s hard not to think of this as the future of political engagement. In terms of market size, video games are bigger than every other form of entertainment combined — nearly $160 billion in revenue in 2020 alone. And the industry represents a powerful social force as well, not only in terms of massive harassment movements like GamerGate, but also in terms of how it has redefined the way we communicate online.

So seeing a prominent, media-savvy, and increasingly influential politician using video games as a way to connect with a new audience and encourage them to vote (for progressive values, of course, because that’s what AOC believes in) is one of those things we call a Big Deal. And of course the AOC-stans drooled at the prospect of her ushering in a new era of politicians engaging with the public not through debates and rallies, but through games.

This is obviously premature. Huge though video games may be, they pale in comparison to the viewership of a full presidential debate on network TV (around 63 million people watched the third debate between Donald Trump and Joe Biden, compared to the 430k who watched AOC play Among Us). There just isn’t a suitable comparison to using video games as a channel for political engagement.

Using a game contest as a substitute for politics isn’t exactly a new concept — you can look back to ancient Assyria for examples of kings engaging in ritualistic combat with a wild animal to “prove” their fitness for the throne, for example — but those spectacles did not take place in a democratic context. The idea of subjecting an ostensible debate for fitness for office to a literal evaluation of fitness in some other form seems odd.

This discussion reminded me of an Iain M. Banks novel, Player of Games. Set in the universe of The Culture, Banks’ tongue-in-cheek response to the sterile utopia of Star Trek, the book follows Gurgeh, the best gamer in the enormous and sprawling civilization, as he travels to a distant star empire called Azad, whose politics are determined by someone’s skill at playing a complicated strategy game to the death.

The book itself is wonderful (honestly, all of Banks’ novels are wonderful, because he is an imaginative and eloquent writer), but what struck me about Azad’s game is that it doesn’t really have an origin. The way Banks portrays Azad was clearly meant to be a commentary on the morality of late Thatcherism (Banks was Welsh), since it was venal, exploitative, obsessed with commerce, and proudly unequal. And in this game, we see a complicated morass of rituals Gurgeh must navigate but very little about who original designed it. And it appears to not be a commercial product.

This always struck me as odd, since Banks rarely misses an opportunity to highlight the moral grossness of capitalism, yet if we were to ever transmogrify our debate system into a game system, I don’t see how it could possibly be created without that sort of commercial backing. In the U.S., we ask private companies to design and built voting machines for profit, which has created a horrible mess that is literally imperiling democracy itself, so how could a full on game ever be designed in such a way that it is resistant to cheating and acceptable to all parties?

In Banks’ novel, of course, Gurgeh has to face a cheating opposing player, and the weird chivalry of the Culture means they won’t intervene to help him (because, unlike other players in Azad, if he looses he’ll just leave instead of facing execution). The psychology of game playing, too, is an important part of the book, as it would be should games ever become a powerful force in our system of elections.

For now, however, we are mostly just hoping that all the legally cast and valid votes get counted fairly. It seems clear everyone from local level Republican officials to Republican Supreme Court justices are casting about for a reason not to fulfill their basic duties of democratic governance (yes, it is entirely Republicans who are actively subverting a free and fair elections, and have been doing so for years). So who knows, maybe subjecting it all to a game would give us a better result than asking a bunch of political foxes to guard the public henhouses.

But we’re a long way off from even thinking about that. In the meantime, engaging with voters over a game stream is a creative and effective way to connect with younger voters and, as AOC wanted to do, get them interested in voting. The connection, the pseudosocial relationships, and the pleas to get involved, might actually have enough of an impact to normalize the practice. And THAT would certainly be interesting to see. At least, more interesting than pretending Iowa is a representative state for our country and watching wealthy city people shove a corndog down their throat like they grew up on a farm. I’d much rather watch someone fight zombies in Minecraft. Wouldn’t you?