Imagine, just for a moment, that we had a different February. The COVID-19 pandemic was reaching emergency levels in China, it had made landfall in Australia, Canada, Itay, and Iran, and we all knew that it would eventually come to the U.S. Imagine if the federal government had immediately set up testing sites at every port of entry with thermometers and symptoms screenings, and had begun to scale up the manufacturing base for PPE. Imagine if they had collaborated with the WHO and Chinese CDC to develop a test that could be manufactured as scale.

Imagine that when March hit, and the first cases began to pop up here, that the federal government immediately unleashed money to assist states in securing PPE for their first responders, provided materiel support for setting triage centers, and coordinated a nationwide emergency scaling up of testing and contact tracing.

Now let’s imagine further that as the virus first showed up in large numbers in California, New York, and Colorado, and the stay-at-home orders were issued nation-wide, with the president speaking about our shared fates, our common good, and the duty we have to each other. Imagine yet more that Congress leapt into action and issued a series of appropriations to pay every single human being in the country to stay home for a month, paying every single working person $2000 so they can stay solvent, and let’s imagine they placed a moratorium on rents for 60 days and on evictions for 90 days.

Let’s imagine all of that. Especially in hindsight, we have a fairly good idea of what would happen: our death toll would be far, far less than the 130,000 it is right now; the economic devastation from months of unemployment, and the prospect of yet more months of deeper unemployment during the not-second-wave of infections would not have materialized to even remotely the same extent; and it would have cost the federal government hundreds of billions of dollars less money than the PPP and CARES Act have cost.

This was the sort of intervention public health professionals wanted to see implemented in February.

But such an intervention is impossible to imagine for many. Not because it is objectively impossible, but because two-and-a-half branches of the American government, right now, are captured by a cabal of unpopular crazy people who find the idea of compassion, public service, and empathy not just unfamiliar, but abhorrent. What we got, instead, was a bizarre mixture of do-nothingism, catastrophic bureaucratic incompetence (driven in part by decades of that same cabal intentionally undermining the government it ostensibly ran), endless lies, interference with state level mitigation efforts, and a right wing media ecosystem so captured by paranoia, fabulism, and cultural warfare that they insisted a global disease that has killed over half a million people and counting was also, somehow, a hoax invented by the opposition party to undermine an unpopular president.

And in the meantime, a growing number of people began to believe the lies, dissembling, and prevarication, and reject basic medical science about how infections work and what sickness means, and the nightmare scenario we went into partial lockdown in March to prevent is now happening as whole regions of the country run out of ICU beds.

That isn’t a very enjoyable thing to think about. It isn’t pleasant to realize that your society is currently run by malicious nincompoops who truly do not care if you live or die so long as they get to score points against their political enemies. No one really wants to think that people’s sense of entitlement and greed is so large that they’d rather see hospitals fills with bodies they cannot count just to avoid modifying their consumer behavior for a short period of time.

The story of how America became a global pandemic vector has three parts to it: the political establishment, the general public, and the public health professionals who have been trying to get the first two groups to do the right thing. Public health professionals (a group that includes federal officials like Dr. Anthony Fauci, state level public health officials, and both public health academics and epidemiologists) were put into an extremely difficult situation at the start of the pandemic: a classic dilemma, which is that reacting appropriately to a pandemic will always feel like an overreaction in hindsight. Precisely because an intervention worked, the severe emergency never materialized, so it’s tempting to wonder if the intervention was necessary in the first place. There was also a further added challenge that the virus that causes COVID-19, SARS-CoV-2, is novel, which means we have never seen it before. This meant they had to make decisions and issue advice that balanced an impossible mixture of crises:

Everyone was making guesses at the best way to approach this, based on a combination of previous experience and estimates of what certain population outcomes in China might mean for populations in the U.S. It would be impossible to get everything right. And yet, some astonishingly smarmy media coverage about COVID-19 has centered on an appealing message liberals and conservatives alike can agree on: the federal government gave us really bad advice on whether to wear cloth masks in March, so therefore people refusing to wear them now, in June, is somehow an understandable confusion. This is the worst sort of hindsight bias, built on a foundation of utter nonsense.

First, some principles. When you encounter a “novel” pathogen, it means you’re working in the dark for a while. Humans have millennia of experience with coronaviruses – it is what causes the common cold. When the original SARS virus appeared in East Asia 20 years ago, it was novel: while structurally similar to the common cold, it was far more deadly and transmissable. A decade later, when MERS emerged in Saudi Arabia, it too was novel. These diseases were difficult to counter, and even years after they appeared the effectiveness of protective measures – including masks – was still the subject of debate. This is very difficult, and demanding perfect information and therefore perfect advice within 12 weeks of encountering a brand new pathogen is simply unreasonable. Hell, the COVID-19 virus genome wasn’t even sequenced until April – weeks after it appeared in the U.S., and weeks after the “bad” advice on masks became the subject of public scrutiny.

Public health communication is not easy, which is why there is a vast literature about what works and what doesn’t. One solid and pragmatic guide is HHS’s Making Health Communication Programs Work, often called the Pink Book becuase of its garish pink cover. While the whole thing is actually quite interesting and worth reading, what interests me is the guidelines they set up right in the introduction, discussing what public health communications can do, and what they cannot do. This can help us frame whether the hindsight criticism of the mask communications is grounded or not. 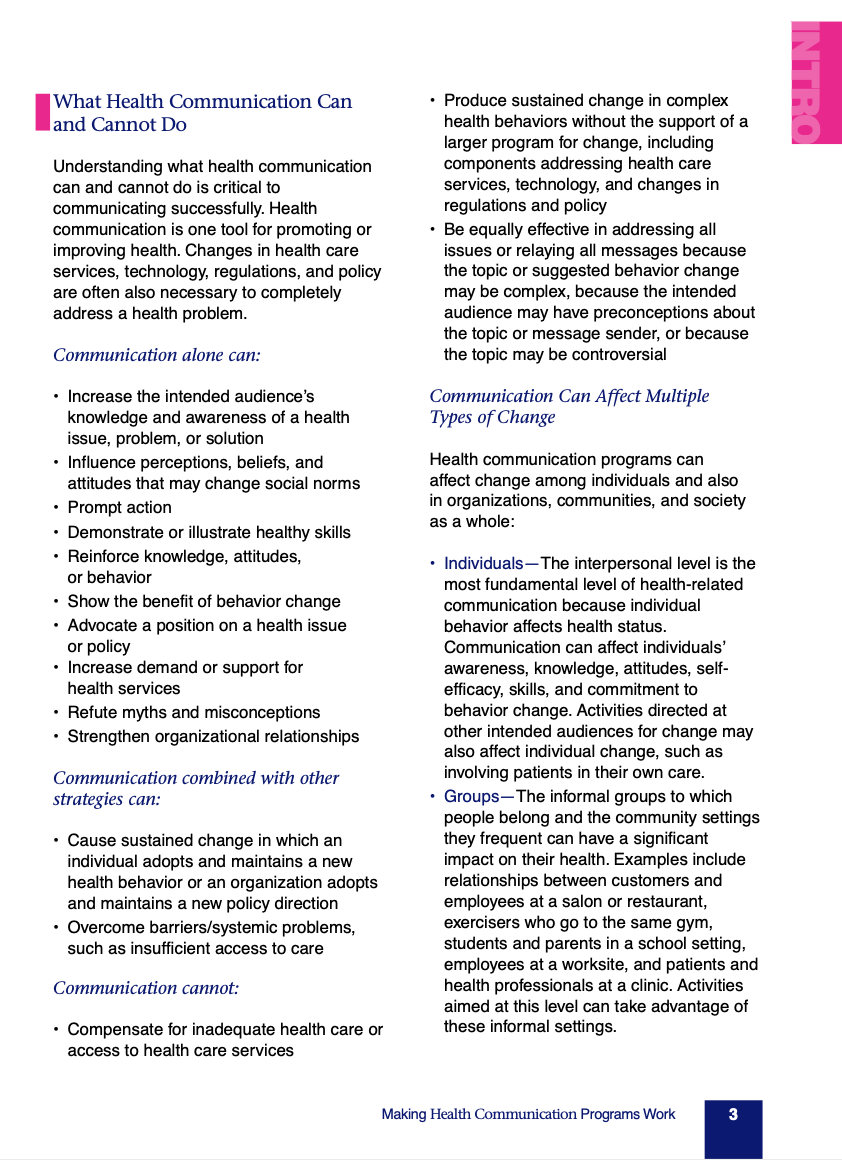 In March, when the CDC told people not to go out and buy masks, they were worried about two things:

Even in hindsight, those are justifiable, grounded concerns to have – ones only partially resolved as the commercial supply chains caught up to demand. But plenty of people who wear cloth masks have a false sense of security about it. That concern, which was widespread in March, remains more relevant than ever today – these masks do not protect the wearer from COVID-19, and they do not make it impossible for a wearer to transmit it to people nearby. It only makes it harder to transmit the virus.

Was the CDC incorrect in saying in March that wearing a cloth mask was pointless? Yes. Does that mean they were wrong to do so? No. At the time, with the information they had on hand, it made sense for them to say wearing a mask didn’t help and that what mattered was social distancing and supporting frontline healthcare workers. In fact, that is still the case: keeping physical distance from people is far more effective than wearing a mask.

This weird media smarm about mask advice is not about the masks themselves. The virus is not rampaging through Texas and Florida because three months ago people got bad advice on wearing masks. The virus is rampaging because the political establishment in those states made catastrophically bad decisions that are reverberating across the country – even as the first round of affected states were slowly getting their own crises under control. A single piece of bad advice, corrected after only a couple of weeks, is not responsible for the terrifying prospect of a cratered economy, the prospect of schools turning into infection vectors as people rush to send away their kids for the day so they can work, or for the ominmous prospect of the primary care system collapsing.

No, the reason the pandmic is raging through America, while it slowly recedes in other, similarly advanced countries, is purely a failure of political leadership. Public health professionals have been open, transparent, and honest with their advice and their level of knowledge. They have corrected their advice as they learn more, and their messages demanding political leadership while begging for personal responsibility to take this pandemic seriously have remained mostly unchanged since the start. Blaming them for how bad things are is a category mistake, confusing the failures of our entire socio-political system with the actions of one small part of it.

Those failures matter. They need to be examined more, and the people who intentionally made this pandemic worse (most of whom live in the White House, with others in the governor’s office in places like Texas and Florida) deserve harsh scrutiny for the way their fatally negligent behavior has killed over a hundred thousand people. And yes, the public health field should examine why it guessed wrong about the utility of cloth masks in slowing the rate of transmission. But focusing only on the latter, while ignoring the former, is asinine. We are all exhausted by the extreme partisanship that defines our public sphere, but that’s no excuse for ignoring politics. COVID-19, in America, is a political disease as much as it is a medical one. We need to keep that in mind as pundits and media folk try to massage a devastating failure of our civic institutions into a narrower critique of experts who got one call out of 100 wrong.