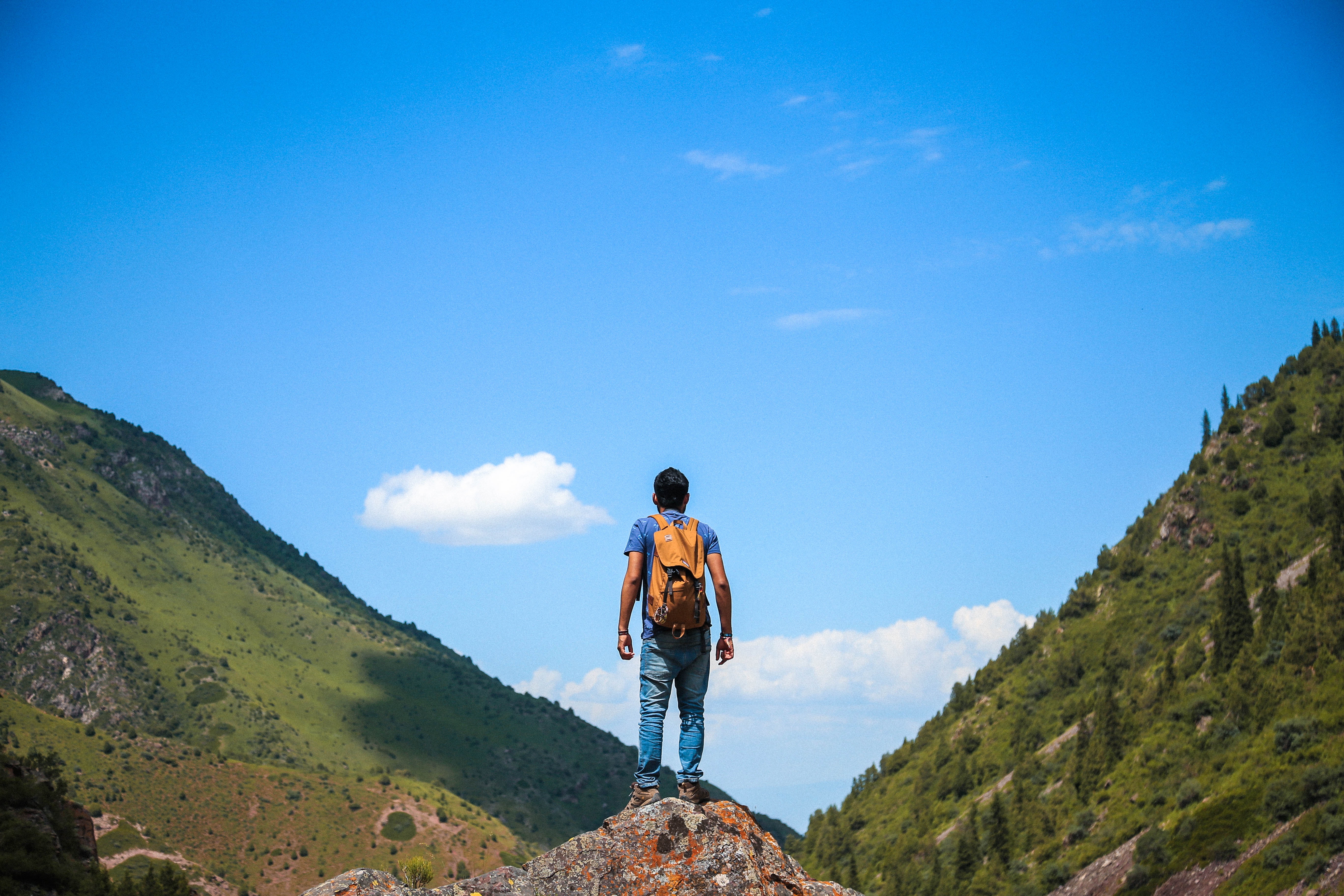 Photo by Oziel Gómez from Pexels.

The COVID-19 pandemic has revealed some of America’s deepest pathologies, especially around the racial politics of healthcare. But these pathologies show up in other places you might not expect.

Take the politics of simply existing outside. Here in Colorado, there is a widespread belief that outdoor recreation is an essential cultural activity — and the state government has included special provisions for that industry in its various public health orders around the pandemic. A big part of the alternative list of activities public health experts ask people to do, instead of spending extended periods of time indoors with people, is to go outside. Go for a hike, for a socially-distanced camping trip, go for a bike ride, and so on.

There is good science for this. While there is a fairly obvious reason public health experts ask you to not travel very far from home (this keeps infection clusters localized and minimizes the change of previously-uninfected people bringing the pathogen back home), there is also widespread scientific evidence that being outside, so long as you maintain a 2-meter distance from other people, is pretty low-risk.

That being said, the outdoors in Colorado can be an overwhelmingly white, straight place. The ongoing protests over George Floyd have galvanized a broad swath of the country to take racism — and, importantly, anti-racism — much more seriously as an active and ongoing problem to be addressed. While diversity has been a buzzword in the outdoor industry for years, often culimnating in tepid promises to provide cheaper gear and a more Beneton-like advertising posture, the real challenges facing diversity in the outdoors require more.

“The outdoor industry has been ignoring Black people for years,” Ayesha McGowan, a professional road cyclist for Liv Racing, recently wrote. Crucially, she writes that companies should not focus just on the grief and pain that Black folks experience living in a white society — which is what you see from those black squares on Instagram or the “we totally think black lives matter” corporate statements issued in June. Rather, she argues, they should also focus on Black joy. “We want to ride bikes, climb mountains, traverse slot canyons, and surf waves,” she writes. “Black folks deserve to enjoy the outdoors in every way.”

But is that even possible right now?

The outdoors isn’t just overwhelmingly white and straight — and male — in Colorado. Recently, New Jersey officials closed Lake Solitude, ostensibly because of overcrowding. Indeed, the lake had become crowded, as many public spaces have, as people seek some sort of recreation activity outside, where they’re told it’s safer than being inside. And many visitors to the lake were from out of state, places like New York, which caused nearby residents to complain that people from a former COVID-19 infection cluster were putting them at risk by traveling there (Colorado strongly advises people not to travel more than an hour from home for recreation).

This is happening in communities all over the mid-Atlantic. Woodstock, NY, had to close down popular swimming spots because of huge crowds and an overwhelming amount of litter. While parks are a public resource, we only provide so many resources to manage them — and when they are overwhelmed it can become a dire situation very quickly.

But overcrowding did not seem to be the primary concern for the residents near Lake Solitude, who are also 95% white.Their public complaints about overcrowding focused on the perceived ethnicity of the visitors as much as their numbers or the overflowing trash cans. Journalists found liberals and conservatives alike complaining about “out-of-state Spanish people” flooding the area, with remarks about calling ICE to harass them away.

This is how white supremacy works at a practical level. People aren’t engaged in race riots; they are mobilizing the state to prevent the wrong color skin from using “their” space (even when that space is open to the public as a while).

At the same time, people of color are far less likely to have access to parkland, public land, and open spaces than white people — and this is almost entirely by design. The very environmental movement that helps to create and defend these spaces, was powerfully influenced by John Muir — who was himself so infamously racist that the Sierra Club, which he founded, has come to denounce him.

While the environmental movement may have “the stated goal may be the preserve the intrinsic beauty and worth of the wilderness,” s.e. smith recently wrote, “it comes with the loaded expectations about who can use that space and how.”

Consider Rahawa Haile, a thru-hiker (that is, someone who hikes over very long distances, like the Appalachian or Pacific Crest or Continental Divide Trails). A few years ago, Haile decided to go on a solo hike of the Appalachian Trail, and was reminded constantly on her journey that Black people “don’t hike.”

And it isn’t just people of color who experience exclusion in the outdoors. Camping has, for well over a century, been associated with upper-middle class white people in America — something done by people with lots of vacation time and the resources to buy specialized equipment in order to comfortably enjoy the outdoors. Over the 20th century, the idea of camping became increasingly democratized to various degrees, though it remained almost exclusively white and male in outlook.

And straight, as one might assume. But that wasn’t always the case. As Juniper Lewis recounted in 2018, the Civilian Conservation Corps, a New Deal jobs program that gave jobs to young unmarried men, was also a place where queer relationships flourished.

This idea of queerness being an artifact of men being together outside can be parodied, but it has long roots in history. In the 19th century British prison ships took felons to build defenses on overseas holdings. In one of those holdings, Bermuda, George Baxter Grundy, serving a 15-year labor sentence, reported a thriving queer community, complete with same-sex marriages and the tacit approval of the British Navy guard.

In the 19th century American West, a so-called “bachelor’s paradise,” the population was mostly men. Because of the lack of women — in 1850, the population of California was estimated by one historian to be 90% men — men would assume roles that women would fill in other parts of the country. This could take the form of dancing together, sharing beds, having illicit sex, and even same-sex “bachelor marriages.” (William Benemann wrote a fascinating portrait of one such Wild West queer, a Scottish dandy named William Drummond Stewart, and it’s worth reading if you have the time.)

So what does this mean for right now? Well, brands are trying to get in on the game. I’ve written about Walmart before, and how it is trying to seed the market with cheap, but acceptable gear, to make it easier for people with fewer resources to get outdoors. But is that enough? The stories I referenced above suggest it is not. The exclusionary nature of the outdoors is not just a function of class — it is a function of identity. Putting a few people of color into a catalogue is a nice gesture, but it doesn’t change people’s attitudes toward the non-white or the non-hetero “invading their outdoor spaces.”

Rather, broader social change needs to happen. This is where representation can have meaning. I was struck by a recent REI film about a young woman choosing to go on a bikepacking trip through the woods of Oregon. She is not what we are trained by pervasive adventure media to expect a mountain bike riding adventure seeker looks like… and that makes her journey, and the way it is catalogued, all the more compelling and worthwhile.

One of the low-key points made in Reese Witherspoon’s 2014 film “Wild” is about how few women in the 1990s ever did long distance thru-hikes. Thankfully, it is far more common to see white women on the trail now, but they are still white. When a non-white person engages in outdoor recreation, the (mostly white) adventure media that discuss it tend to pathologize their involvement. Same for queer folks, too! We aren’t allowed to simply enjoy the outdoors. We have to be making a statement about it.

That is an exhausting state of affairs, even is that sort of public, intentional visibility is necessary to shift the framing of outdoor recreation. I’m hopeful that it will soon be unnecessary, that we can just exist outside, and enjoy the land, and not have to worry. Maybe, some day, we will.