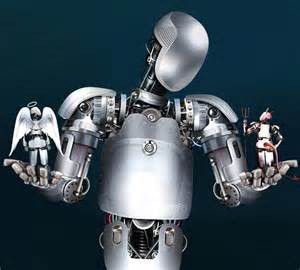 Which brings us back to Russell’s optimistic assumptions that computer scientists can sidestep these social questions through superior algorithms and engineering efforts. Russell is an engineer, not a humanities scholar. When he talks about “tradeoffs” and “value functions,” he assumes that a machine ought to be an artificial utilitarian. Russell also suggests that machines ought to learn a cross-section of human values from human cultural and media products. So does that mean a machine could learn about American race relations by watching the canonical pro-Ku Klux Klan and pro-Confederacy film The Birth of a Nation?

This is one of the most important questions to grapple with when thinking about whether computer systems have values and what those values might mean. Elkus and I agree that right now intelligent systems will be reflecting the values of the society that created them. The challenge is that those values are not only not universal, but even within a culture they vary: after all, to read the constitution slavery is just as much an American “value” as is individual liberty from government control. Much of American political history has been devoted to wrestling with what, exactly, American values really mean: helping the poor? Segretating dark-skinned and light-skinned people? Access to abortion?

And even putting values in terms of “American” values has a lot of context that probably won’t make sense for developing artificial intelligence. A common refrain among left wing activists (and, ahem, Sting) during the Cold War was that “Russians love their children too,” so therefore, the thinking went, why would we need nuclear weapons? This is an attempt to take a common human value — regard for one’s offspring — and from that assume that everyone sharing regard for their own off spring should compel people to not hate or commit acts of violence.

The obvious nuttiness of such an idea (German Nazis loved their kids but they still committed genocide) should speak to the nuttiness of trying to program “human value” into an artificial mind.

But I want to go a step beyond where Elkus goes. He asks what those values should be, rightly notes that a wide range of values exist across humanity, and argues that it is simply not appropriate to have straight white cisgendered male scientists making that determination. And he is correct to do so! But why should we assume that “human values” will be meaningful at all to a machine? We know that even humans with similar values will do unspeakably terrible things to each other — the common heritage of European liberal values plunged the entire world into horrors unknown in our history during the 20th century — so why should we expect a machine that is somehow programmed with those values would do anything else?

After all, humans raised in the same environment by the same parents will often exhibit a wide range of behavioral and psychological outcomes later in life — is that an issue of their receiving the right “values?” Hell, a big chunk of American pop culture is about cheeky teens telling their parents to shove their boring adult values where the sun won’t shine. Who in their right minds would want a machine to grapple with such a thing?

Therefore, I suggest that maybe the entire discussion of “values” in artificial intelligence is little more than a moral panic, because “values” as we conceive them (with all of the many unspoken assumptions that go into such a concept) are meaningless to a machine. The A.I. researcher Joanna Bryson argues that we cannot assign biological values to machines “because our complete authorship [of robots and AI] is fundamentally different from our relationship to humans or other evolved systems.”

Think of what goes into a “human value.” You could say it is a set of normative assumptions about moral beliefs, tied to a set of personal rules, steeped in an idea of justice, bounded by social constraints on behavior, and on and on and on, and even then it will be henpecked to death by philosophers and social scientists and theorists and critics about what any of those words even mean, because we do not have a solid understanding of what universalist values are for humanity. In a real way, we don’t have any. So demanding machines somehow be programmed with these ephemeral, intersubjective, vague, and relative values is an impossible demand. I wonder if it’s intentionally made impossible, so as to forestall meaningful development.

Because we have no theoretical way of overcoming the halting problem, even the smartest artificial intelligence system we can create will, ultimately, be just a dumb machine. It will never be able to do more or less than it is precisely programmed to. And, ultimately, the bounds with which that machine are programed will not have values that are “human” in any universal way, but rather societal and cultural. And in a major way, our machines already reflect our values.

At the end of the day, we, as a species, have a very poor understanding of how and why we make moral decisions, how our values interact with our decisions, and how those decisions actually get made. At the most, we can infer certain types of bounded hypotheses based on limited observation of small control groups; this is a poor foundation for creating an entire psychosociology of a new class of artificial brain we still cannot theoretically describe. So why does the discussion seem caught at the debate over which “values” a machine should be programmed with? It’s like starting the alphabet at the letter “L” instead of “A.”

So could we possibly expect an artificial intelligence, steeped in none of the acculturation and biological urges that (very complexly) make up who we are, as value-based beings, to reflect our exact moral priorities? To me, this is a non-sequitur. We have no right to demand or assume that a software-based system will have any moral analog to what we consider to be values: it might, but it probably won’t. It will have its own values: they might align with ours, and we should try to make sure they don’t clash with ours. But why on earth would we try to make a non-human have human values? It’s like asking a dog to have human values — it never will, and it is deeply unfair to expect a dog to do so.

The Evolution of Robot Panic

Why Experts Fret About A.I.