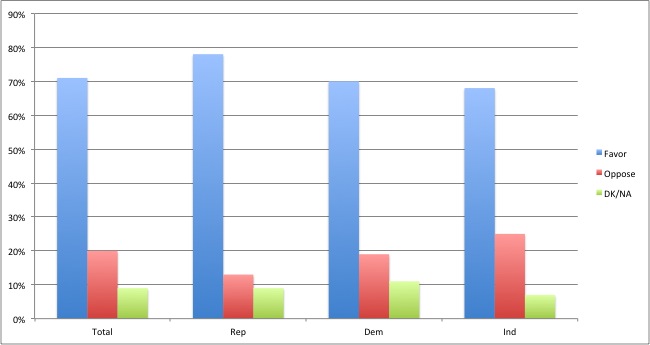 q63: Do you favor or oppose the U.S. using unmanned aircrafts or “drones” to carry outbombing attacks against suspected terrorists in foreign countries? 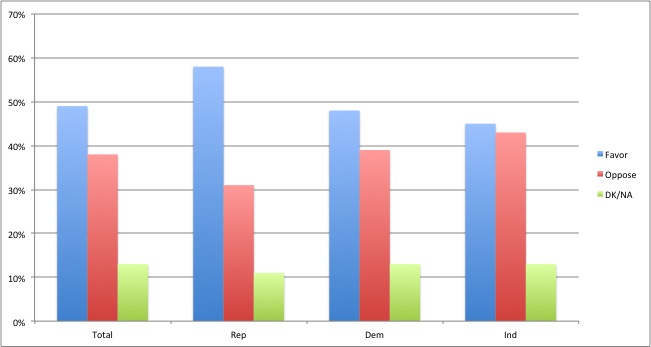 q64: Do you favor or oppose the U.S. targeting and killing American citizens in foreign countries who are suspected of carrying out terrorist activities against the U.S.?

Though the numbers are a bit eye-popping — 48% of Democrats favor summary executions for Americans suspected of terrorism? — they have changed substantially in the last year. The survey was structured different, but around this time last year a Washington Post/ABC poll showed much higher support for both drone strikes against terrorists and drone strikes against Americans suspected of being terrorists. 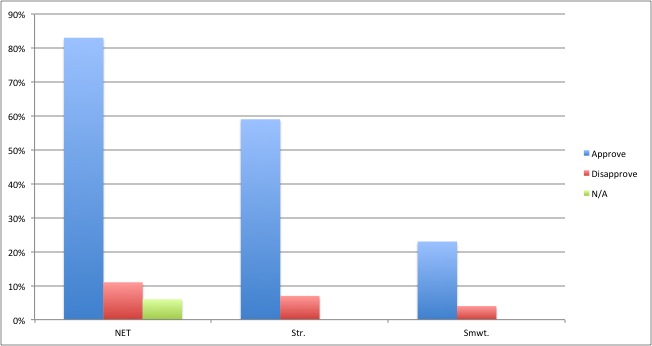 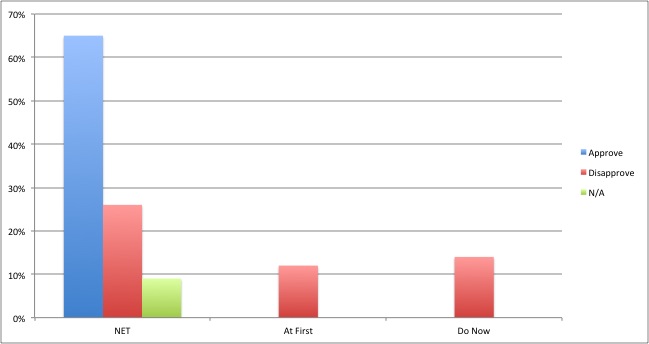 13c/14 NET: What if those suspected terrorists are American citizens living in other countries? In that case do you approve or disapprove of the use of drones?

Now, the caveats: these were polls taken by different companies, using different questions. So there is only so much we can do in the way of drawing conclusions. But I think there is almost no question that the public mood about drones has become much more skeptical since February of 2012… and the administration has not been publicly flogging the idea of U.S. citizen Anwar al-Awlaki as a huge threat to the homeland (which probably influences public opinions as well).

So what does this mean? Let’s assume the huge difference in poll numbers has been exaggerated because of differing methodologies. It’s still clear that public support and approval of drone strikes, while still strong, is dropping. At some unknown point in the future, possibly the near future, the public will no longer consider drone strikes a legitimate policy for counterterrorism.

This can have profound effects on how CT works. One big strength the White House has in its debate with both critics at large and the “gang of eight” on the intelligence committees is the broad public support for drones: representatives and Senators are less willing to publicly oppose an incredibly popular program. The recent questioning of John Brennan in front of the SSCI showed that this support is slipping, and the Senators are noticing it: even Democrats were openly skeptical of Brennan’s management of the drones program, especially as it relates to strikes against U.S. citizens.

If the drones program loses public legitimacy it will tie the hands of the CT industry, which right now is geared heavily toward an almost industrial process of adding names to the kill lists then removing them through killing. This is literally a multi-billion dollar industry, mostly headquartered along the Dulles Toll Road outside of Washington, DC.

But tying the hands of the CT industry doesn’t really matter all that much if the net result is good. Right now, the data about how effective drone strikes are in reducing the threat from al Qaeda are ambiguous, at best. Some studies suggest that drone strikes do have a deterrent effect (pdf) on future terrorist incidents under some circumstances, but there hasn’t been a systemic study to see if that applies more broadly (outside of northwest Pakistan, which is the one area being analyzed in that study).

It’s not clear if there is a “better” replacement for drone strikes, at least from the perspective of U.S. policymakers. Replacing drone strikes with capturing operations is incredibly difficult politically, diplomatically, and pragmatically. Broad “nation-building” measures to “drain the swamp,” or whatever, of terrorist-producing countries have a fraught history, at best.

So what’s left? For one, the White House needs to be more upfront about how it is running the drones program. If, as officials insist, civilian casualties have really been in the single digits, they should provide the data to prove it, considering the incredible volume of reporting that suggests they are horribly wrong (or lying). And the White House also should be much more open about the legal authorities it is operating under, and how it plans to create better accountability and limit civilian death in the future.

The drones program has merits, that much is undeniable. But it also has major drawbacks, including, increasingly, here in the U.S. Yet the White House continues to operate as if its solemn promise of professionalism and effectiveness is enough to quell public doubts. It is not, at least not any longer. The priority for Lisa Monaco, who is replacing John Brennan as the White House Counterterrrorism Adviser, should be to devise a plan for opening certain, limited aspects of the program and creating unclassified datasets for the public.

Only opening up a little bit about the drones program will assuage the growing public skepticism of the drone strikes. And even then, it may be too late: the White House’s dogged and unrealistic insistence on extreme secrecy for the worst-kept secret in Washington may have already poisoned the well beyond redemption.